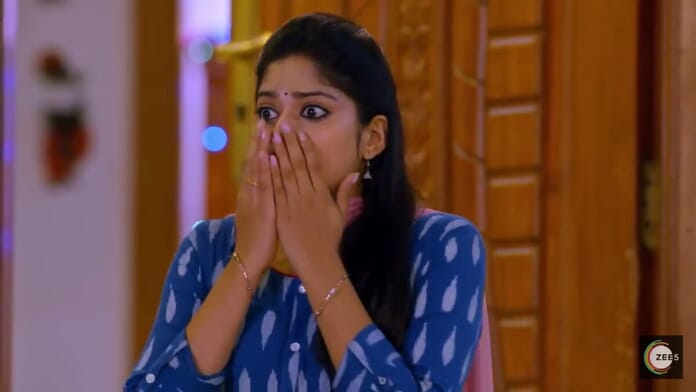 Zee Tamil’s much-loved daily soap, Neethane Enthan Ponvasantham, is getting more interesting with the new twists and turns in the show.

In the previous episode, it was seen that Surya revealed to Anu that Devanandhini had spent her childhood in the place where the guesthouse was built. Surya then asked Anu to narrate what happened the night when she felt someone suffocating her. Anu explained to him what had happened. Surya scolded Dheena for wanting to return home. Later Pankaj questioned Surya why he scolded Dheena to which Surya answered that he deliberately scolded Dheena so that no one else including Anu wishes to go back home. Meera spotted Ragupathi and misunderstood him as a thief. She beat him up. Ragupathi revealed his face and told her how he reached here. He sought Meera’s help to go out, but she refused. They got shocked seeing Pushba coming their way.

In the upcoming episode, it will be shown that Anu and Ramya will be sleeping in the room. Anu will wake up hearing someone knocking on the door. She will hesitate to open the door. She will suddenly hear Surya’s voice. Surya will ask her to come to the lawn. Anu will get excited and will open the door, but she will not find Surya. A scared Anu will close the door. She will hear again Surya’s calling her. Anu will go out of the house. She will shout seeing some lemons blood over placed on a plate along with a smiley ball and warning message. Surya and Pankaj will rush to Anu and will comfort her. When they check, they won’t find anything. Surya will suspect that Surendhar is scaring Anu and will ask Pankaj to find out about it.

What is happening with Anu? Will Surya find out who is doing all this?

Stay tuned for the latest updates on your favorite show.