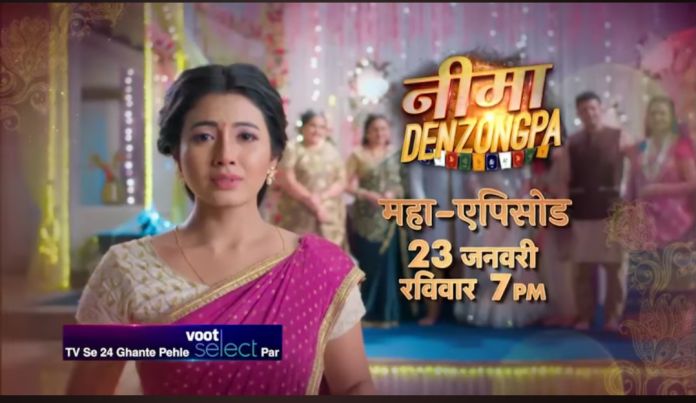 The episode starts with Tulika says to Nima that everyone should appreciate her for bring out Alok’s truth but her mother in law behaved worst with her. Nima tells her Gulshan is very good person by her heart but her situation made her react like that. Tulika appreciates Sunita for played Exorcist character well. She adss that real exorcist also fail in front of her acting skills. Nima tells her that she might thank her for her help. Sunita tells her that she is her mom whom will thank her mom? Tulika tells her that she forget her. Sunita hugs her happily. Nima starts crying thinking about Virat. She shares to them that she is getting Virat’s thoughts often. She is keep staring her phone to get his call.

Something is wrong here. Suresh tells her lets complaint in police station they will find him out asap. Tulika asks her to stop worrying everything will be alright. Nima says to them she is happy because they are with her. Hope she will get Virat asap. Later Tulika shares her doubt with Suresh about their plot. He says to her even he don’t understand where is him there is no information about him yet. Even police have no idea about his whereabouts? Suresh adds that Nima needs their support now they might be with her in this situation. Tulika asks him what’s he thinking about this situation? Suresh notices Nima there.

Nima says to him that she didn’t expected them betray her like this. Tulika asks her what’s she talking about? Nima says to them doesn’t we decided not to hide anything inbetween them? Then why did they hide their problems with her. They are staying with her to slove her issues leaving their life behind. Nima assures to him police searching for Virat and she is also searching him. Nothing to worry about her they might go back and take care of their problems.

Suresh asks her how will he go back? She swears on her to go back. Tulika asks Suresh to leave she will stay with her. Nima asks her to go back with him reasoning he needs her support. Later Sunita packs Tulika’s bag and asks her Is she forget to keep any things inside? Nima tells her that she wanna accompany her because she is staying for her leaving her son behind. Sunita tells her that she is considering Nima as her daughter that’s why she is staying with her. She won’t leave her.

Tulika tells her that she don’t wanna get emotional she has certain limits. She shares to Suresh that she used to think why did god separated him from her? Today she got a good friend in her life. They leaves from there. Later Nima thinks why did love not written on her destiny? Where is her Virat? She reminds about him. She gets emotional seeing his photo and asks him to come back to her. She is missing him a lot.

Nima and Sunita returns to home from market. Black cat crosses them. Sunita tells her it’s bad omen black cat crossing them. Nima tells her Is she still believing this all. Sunita asks her to wait for two minute. Police tells her she might go with them. Nima reaches to mortuary. She gets nervous seeing someone crying for their son. She asks the security why did they called her here? Police tells her that her husband is missing. They find out one unidentified dead body so she wanna confirms whether it’s him or not? Nima deny it reasoning it’s impossible they misunderstood something.

They shows things belongs to Virat to her. Nima gets nervous seeing it. Police asks her to confirm the body. Nima break into tears seeing the dead body. She reveals to Police it’s not her virat but someone else. This things belongs to Virat but this person is not Virat. She pleads with police to find out her husband asap. Meanwhile Sunita shares to Suresh how did police took her with them. He asks her why did she sent Nima with Police alone? Suresh tells her he will come there. Sunita tells him she will inform him if it any emergency. Later Nima walking on road while recollecting the incidents and thinks where is him? She gets surprise to see Virat there.