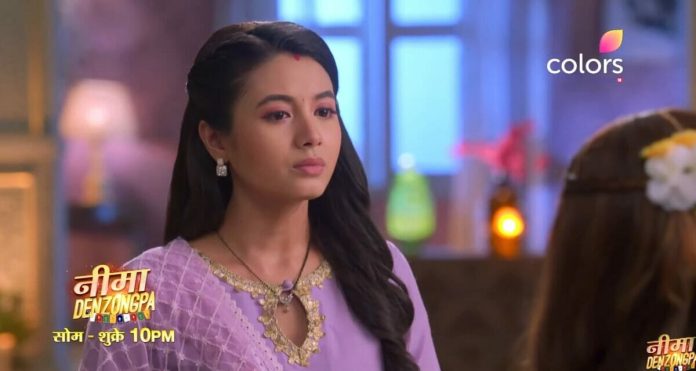 In the previous episode we saw; Priyal announced to Nima’s family members that Virat and Nima were separated. They were no more husband and wife. Manya asked Priyal how much she stoop low. She asked Virat to don’t do it. Priyal said to her that her baby will die if this marriage won’t take place.

Virat asked Priyal doesn’t he agreed to marry her then why did she behaving like this? She started dancing there. Nima worried about baby and asked her to be careful. Priyal blabbered whose baby giving suspicious to them. Priyal pretended like sit there and demanded Nima to apply Mehandi to her.

She asked Nima to write Virat name on her hand. Before she completing his name Priyal noticed Bimla there and rushed out to meet her. Bimla demanded money to her but Priyal assured to give money to her. Varun saw them together Priyal tried to stop Neema from meeting Bimla. Nima signaled Varun to follow her.

Priyal blamed Nima for ruined her Mehandi and demanded her to apply it on her leg. Virat scolded her. Priyal demanded Paras to play drums but Virat opposed it. Priyal threatened them with baby name.

In the upcoming episode viewers will see; Nima will cry thinking about her destiny. Sunita will console her. Later Nima will learn from Varun that Bimla whom met Priyal before some goons were surrounded by her. Nima will meet Virat and think her love will win this time. Both will hug each other emotionally. Priyal will find them together.

What will happen next? Will Priyal fake pregnancy reveal? How will Nima caught Priyal red handed?