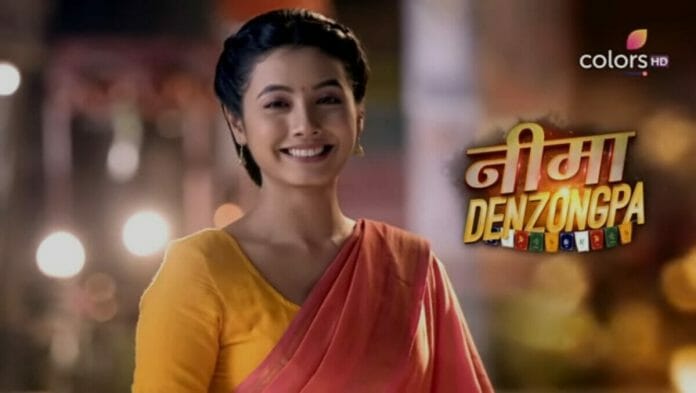 In the previous week we have witnessed, Suresh checked the mirror and said to Alok nothing was written in mirror. He was imagining things. Alok said to him he really saw something wrote on it in blood. Tulika complained to Alok that he was blabbering like this from yesterday.

Alok said to them he really heard sound. Alok heard someone sound there Nima pretended like Bindhu to divert him. Later Alok was sleeping. Nima woke him up he got shocked seeing Nima sitting on cupboard. He got scared and rolled down from bed.

He noticed her missing and lay back on bed. He got scared seeing her sleeping beside him and shouted for help. Tulika and Suresh pretended like they didn’t see anything and gave sleeping pills to him.

Alok was taking breakfast. He noticed two pairs of legs under the table while taking spoon. He shares it to Suresh and Tulika but they didn’t give heed to him. He got scared seeing Nima sitting opposite to him. She was not appearing into camera also.

Tulika and Suresh shared to Sunita how did they fooled Alok by their simple tricks. Nima bursted out in tears thinking about Virat. Sunita asked her to don’t leave her hope and fight back to bring out the truth.

She shouldn’t be like this in such situation. They went to check Alok. Doctor checked Alok and suggested medicine to him. He started shout seeing Nima there and asked doctor to save him. He made him unconscious by injecting medicine.

Later Tulika have coffee to Alok. He searched about Ghost in Google. But results were against him in it. Tulika smirked at him. Sunita came there pretended like Exorcist. Alok insulted her and demanded her to leave the house.

She warned him this ghost won’t leave him. Alok checked Nima’s body and ended up finding out fossils. Suresh appreciated Nima for planned well. Later Alok asked Suresh to save him for m ghost.

He brought Sunita back there. She demanded him to do pooja in his house. Alok gave money to Security and arranged everything for pooja.

Nima returned to her home and got emotional seeing Gulshan picture. She decided to bring out the truth. Meanwhile Suresh complained to Sunita that she was over acted in Alok house. Whom will demand god’s nails, throne and hair for hawan.

Sunita said to him she wanted to act realist there. Tulika appreciated her acting there. Suresh asked Sunita Is she finished the work he gave to her? She nod with him. They went to meet Alok. Tulika, Alok and Suresh were calling Nima’s ghost.

Tulika pretended like Nima’s ghost possessed her body. Suresh tied her hand and took her from there. Meanwhile Nima made sure all settings were working properly. Alok came there surprising. Nima and workers hidden there.

Suresh pretended like Nima’s ghost possessed him to divert him. They escaped from there using that situation. Later Sunita came there and started chanting mantras. Nima came in front of them and scared Alok.

He ran away from there to save his life. Nima went to find out him. Alok locked Nima inside cupboard and burnt it. She shouted for help. Alok said to Suresh that he trapped Nima’s ghost in almira and burnt it.

Alok locked Nima inside Almira and burnt it. He shared to Suresh he burnt that ghost. Nima’s laughing sound scared Alok to the core. Nima came down holding fire lamp.

Alok asked Sunita to save him and hide behind her. She pretended like hold Nima and tied her with pillar. Sunita asked Nima what’s she need? Nima said to her that she need her Virat. Alok might be punished for his sin.

Alok requested her to leave him instead he will do anything she ask. Her mobile rang there alerting Alok. He found out she was doing drama there. He splashes water on her face and complained no one betrayed him the way she done to him.

He threatened to kill her but dropped the knife down seeing his mom and wife. Gulshan slapped him and lashes out at him. Mona and Chinky didn’t give heed to his plea. Police arrested him.

He warned to don’t leave them. Later Gulshan disappointed with Nima for send her son to jail. She demanded her to bring back Virat till then she shouldn’t come in front of her. Sunita took Nima from there.

Tulika complained to Nima that Gulshan might be proud of Nima for bringing out the truth but she accused her instead. Nima said her she was good by her heart but her situation made her think like that.

Nima cries thinking about Virat. Suresh assured her that she will get him back asap. Lets ask Police help to search him. Later Nima overheard Tulika and Suresh were discussing about their plots problem. Nima asked them why did they hide this all from her?

Already they were in problem though they didn’t shared it to her and helped her to solve her issues. She demanded Suresh and Tulika to return their home taking Sunita with them.

Sunita denied it reasoning she is her daughter she won’t leave her. They left from there. Nima got shocked seeing police there. Police took her to morgue. Nima scared seeing the surrounding.

Police asked her to identify the dead body. Nima found Virat’s things there and got devasted. She confirmed it was not Virat and rushed out. She got a vibe Virat was around her.

In the upcoming episode viewers will see; Nima will search for Virat and hit with auto. Lady whom travelled in auto demand Manan to check that girl. Auto driver will look alike Virat. She will demand Manan to help that girl or else police will arrest them if something happen to that lady.

What will happen next? Will Nima find out Virat? When will Virat return to home?