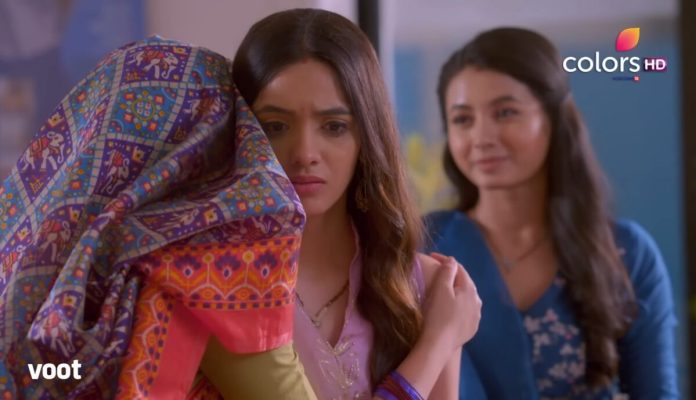 In the previous episode we saw; Priyal demanded Nima to apologize. She apologized for baby sake. Manya said to her she threw words at her in anger. Mona advised Priyal to stop this drama or else this surrogate mother drama ruin her life. Priyal asked her to leave from there. Mona got shocked to see Nima there. She enquired her what was she doing here? Mona tried to manage the situation. Nima clearly said to her she shouldn’t poke her head in her daughter’s matters. Mona said she don’t have time to do it and left. Manya got call from hospital she went to alert Bimla and got to know she was Priyal. Manya lashed out at her for cheated them. Priyal threatened her with baby name. Nima came there Priyal pretended like faint to stop her. Later Manya tried to confess the truth to Nima but later changed her mind for baby sake. Morning she tried again but Priyal stopped her. Nima got allergic to Virat’s perfume he gifted that to Servant. He gave Prasad to her and said that he prayed for her daughter’s. She felt happy to see his love for her daughter. Later Gulshan stopped Virat accompany Nima to hospital. Doctor informed to them Bimla was not pregnant. Manya talked with her in sarcasm.

In the upcoming episode viewers will see; Doctor will inform to Nima report got exchanged Bimla pregnant. They will do ultrasound to Priyal and see the fetal cardigraph. Nima will record the heart beats of baby. Priyal will threaten Manya using Baby name. Virat will be in cloud nine after learn the news. Nima will take Priyal back to home. Nima will share her happiness with Virat and gift perfume to him. Priyal will threaten Manya to don’t reveal the truth. Manya will questions Nima doesn’t Bimla resembling someone?

What will happen next? Will Priyal get caught? When will Priyal true face come out?