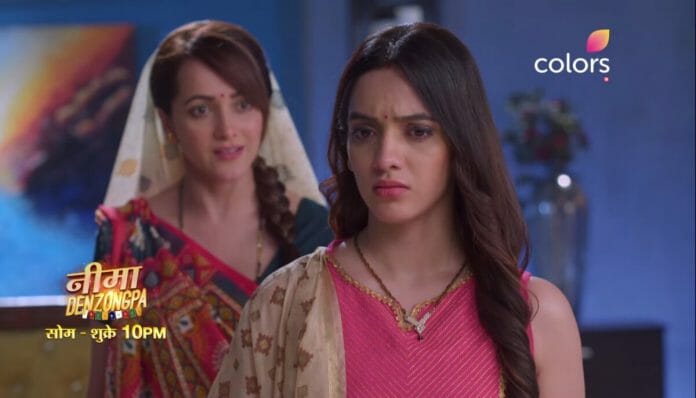 In the previous episode we saw; Virat appreciated Nima for took care of him and Krish. He thanked her for delicious momos. Priyal stared them fed each other. Nima confronted her why did she came to her room? Priyal lied to her that she was searching for bucket and ended up in her room. She lied that she reminded about her husband when did she saw Nima with Virat. Later Sia wished to visit Maniya but her brother refused to go with her. Later Mona doubted Priyal seeing her strange behaviours. Sunita visited Maniya there but Gulshan insulted them so they left from there. Gulshan informed to Nima that she deduct money from her salary for her daughter expenses. Nima agreed to it which frustrated them. Krish called Nima to play with her she played with him. Mona found out that Priyal was disguised like Bimla. She disappointed with her but Priyal was adamant to get Virat. Later Nima noticed Priyal scolding Krish and scold her back. She pretends like she was protecting her baby from him. Priyal demanded Nima to apologize to her first then only she will stay there.

In the upcoming episode viewers will see; Manya will apologize to Nima for scold her in anger. Maniya will get phone from hospital about Bimla. Manya will go to check Bimla and inform her about taking vitamins tablets. She will get shock to find Priyal there. Priyal will threaten her to hide the truth from all using baby name. Manya will hesitate to reveal the truth to Nima. Later Manya will try to confess the truth to Paras but Priyal stop her. Latter Doctor will inform to them Bimla not pregnant Manya will mock at Priyal. Later they will come to know report got exchanged. Priyal expecting.