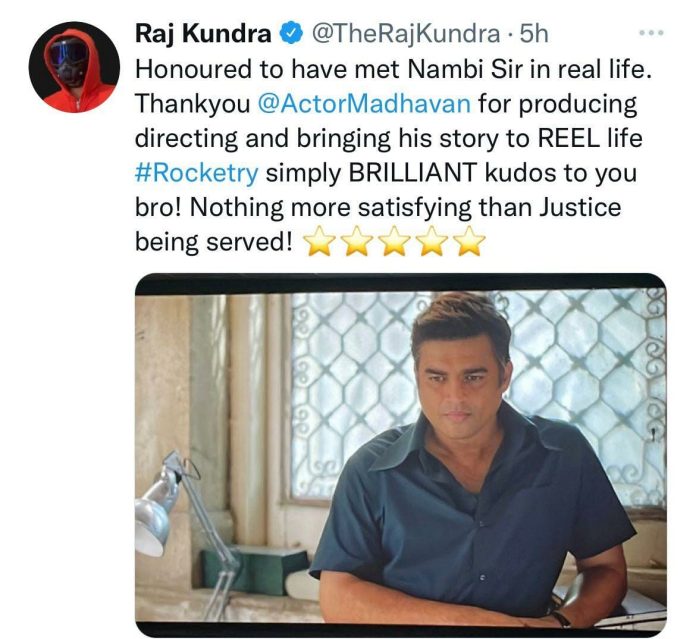 Raj Kundra has been a hot topic in the recent times. He has been the most read, criticised and talked personality. Raj Kundra has always been vocal using his social media. He has always been active and has put his thoughts on twitter. Post his controversy, Raj has never been on twitter. He made his comeback on the platform recently on the occasion of her wife Shilpa Shetty’s birthday.

Raj Kundra is again in news. This time he is in the headlines for his appreciation tweet for R Madhavan’s latest released film Rocketry:The Nambi Effect. The tweet did praise R Madhavan and his brilliant work in the film but what just tickled the audience was his last line in the tweet. ‘Nothing more satisfying than Justice being served!

Raj Kundra gave 5 stars in his tweet where his entire tweet mentioned, ‘Honoured to have met Nambi Sir in real life. Thankyou @ActorMadhavan for Producing, Directing and bringing his story to REEL life #Rocketry simply BRILLIANT kudos to you bro! Nothing more satisfying than Justice being served!

Raj Kundra has covered himself entirely in his every outing. The paparazzi have been clueless but yet suspicious behind his hidden mask theory. Raj hasn’t revealed his face from the longest and his latest tweet of him mentioning about, ‘Nothing more satisfying than Justice being served!’ is more than enough to become a headline.