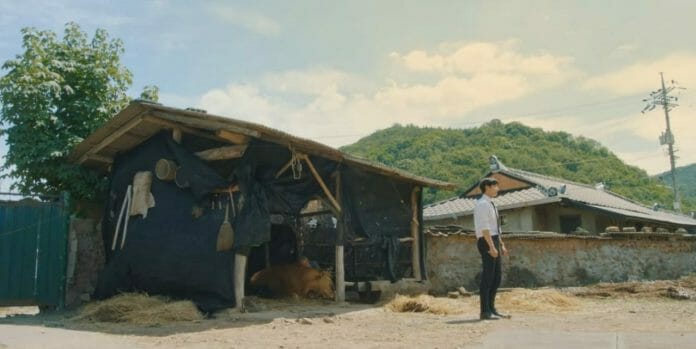 The episode starts with Ji Yul remembering travelling with his parents in his childhood playing a game. Their car met with an accident and Ji Yul got saved by a man and his daughter (probably Ja Young and her father). In parallel, Ji Yul saves Ja Young and lifts her up in his arms running. Ja Young is admitted in hospital when Sang Hyeon rushed to her. He asked about her health for which Ji Yul replied that both she and Sergent Yoon were safe. Sang Hyeon thanked Ji Yul and left to take care of paperwork. Ja Young wakes up after sometime and immediately asks Sang Hyeon about Sergent Yoon. San Hyeon replies that he’s fine and Ja Young recalls getting saved by Han Ji Yul. Sang Hyeon is upset regarding the same but still jokes with her. He takes her home while Ji Hyul who’s waiting outside in his truck watches her leave with Sang Hyeon. At night Ja Young wonders about how to text Ji Hyul while both Sang Hyeon and Ji Hyul were thinking about her.

Chief scolded Ja Young and Sergent Yoon for back to work so soon. They both told that they are fine and doesn’t want to take rest. Chief is hell bent on sending Ja Young for leave but Ja Young wanted to check on Pyeong Shik as she couldn’t do it yesterday. She left but turned around to go to Ji Hyul’s clinic. Jang says that he left somewhere but didn’t say where. Ji Hyul went to visit his parents to pay his respect. Ja Young gets disappointed that she couldn’t meet him and returns only to bump with Ji Hyul. They both got down when Ja Young thanked him for saving her. Ja Young got call from Mr. Lee and rushes there apologizing Ja Young. Sang Hyeon passed by and Ja Young got on his vehicle. He asked about Pyeong Shik and she told that he’s fine but his bull is not in good condition. She wants to give her answer to Sang Hyeon but Sang Hyeon avoided it. Ji Yul checked Pyeong Shik’s bull and found that it cannot be saved due to old age. Pyeong Shik told that he don’t want him to save the bull but give him Euthanasia to give it peaceful rest. He pleaded Ji Yul for the same.

A meeting was held regarding a shooting and both Maijong and Huidong fought that it should be held in their place. They kept points against each other for the same. The women’s organisation lady lost her cool when one lady from the other side called Huidong as ghost town. They get into a fight when Ja Young tried separately. The Maijong woman accused Ja Young for siding with Huidong and regretted for taking pity on her for being orphan. The fight deepened while Ja Young had a difficult time controlling them. She even tried to use her officer status but in vain. Ji Hyul to help from his colleague to put the bull to rest. After much thought he went to the veterinary pharmacy to get the drugs. Sang Hyeon wanted to be with Ja Young who was upset with the woman’s words but Ja Young wanted to walk alone and do patrol. Ji Hyul got the drugs from the veterinary pharmacy.

Ji Hyul injected the cow with anesthesia first and then the medicine to stop it’s heart. He said the same Mr. Lee. Lee talked with his bull and wanted to unite with it in its next birth along with his wife. He had an emotional moment. He says Ji Hyul that the bull was with him for so long that it’s going to be difficult for him to live without it. He says that he knew that it’s parents death anniversary and recalls having him with him while his grandfather was busy with his parents last rites. Ji Hyul apologized for not identifying him but Mr. Lee says that it’s fine. He says about his secret friend Ja Young and that’s when realisation hit Ji Hyul. He came to Ja Young and recalled all their happy moments in childhood.