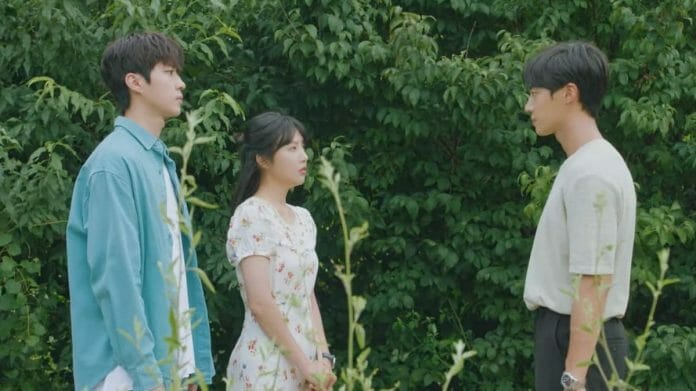 The episode starts with Ja Young lost in Ji Hyul’s words. Her colleagues were confused about her sudden weird behavior. She recalls Ji Hyul confessing that the time he spent with her was the best thing about that year. He even apologized her and gave her his bicycle for return. Ja Young keeps caressing the bicycle. Ji Hyul is examining a cow when he hears few ladies gossiping about other town’s women’s organisation head badmouthing Ja Young for being an orphan. He comes out to find the same head coming crying to him. She says that her aged mother is worried sick about her dog but none could be contacted due to the distance. Ji Hyul tries avoiding it but Ja Young offers to take him with her in a short route. He takes her aside and questions her about helping the lady who behaved so bad with her. Ja Young laughs it off and drags Ji Hyul with her to the sick dog.

On the way, Ja Young asks Ji Hyul if he wanted to avoid going there for her and says though she new she’s selfish she can’t let the dog suffer for it. Ji Hyul says it’s the same reason he’s going with her and they both quarrel about referring each other with honorifics. They visit the grandmother and checks her dog. Ji Hyul before leaving says that the dog is fine and she’s grateful for their help. She offers them corn for gratitude. Ji Hyul notices the tire punctured and says Ja Young about it. Ja Young contacted the service person who says that it takes time for him to buy the fire and fix it. Ja Young apologizes Ji Hyul for wasting his precious time as he also don’t like things happening spontaneous. Ji Hyul says that he’s used to it from the time he came to Huidong. They enjoy snacks and spends some quality time alongside beach.

Ji Hyul and Ja Young are on they way to home when Ja Young notices a car speeding up before them. Ji Hyul drops Ja Young when the girl in the sped up car identified Ji Hyul. Ja Young took her leave believing them to be in relationship while Ji Hyul looked after at her. Yun Hyeong also visited Ji Hyul’s veterinary clinic at the same time and met with Nurse Yang Suk. Its revealed that the girl is Min who’s Ji Hyul’s ex girlfriend and is there to patch up with him. Ji Hyul showed no interest but Min wanted to stay there for a week to convince Ji Hyul. Yun Hyeong revealed that it’s him who revealed about his current location in his video and Min used it to track down Ji Hyul. Min told that she spoke with community hall for accommodation for herself while Ji Hyul gets frustrated.

Ja Young is upset over the sudden girlfriend visit when she is asked for a help by Cha Yeon Hoon. She went there only to know that she had to share her room with another new resident as Cha Yeon’s house pipe has bursted. Ja Young gets shocked knowing that her room mate is none other than Min and finds Ji Hyul with her. The women association ladies predicts that she’s Hyul’s girlfriend and teases them. When Ji Hyul is about to say the truth Sang Hyeon comes there and introduces Ja Young as his girlfriend which pissed off Ji Hyul. Ja Young showed her house to Min and let her settle. Ji Hyul and Sang Hyeon were still outside when Ji Hyul told that Min is not his girlfriend. He’s about to say the same to Ja Young but Sang Hyeon dragged her away with him for a walk with her dog.

Ji Hyul comes home and behaves angrily with Yun Hyeong for revealing his hideout. Yun Hyeong suggests hinyto accept Min back as she’s compatible for him and they parted ways only because she went abroad. Ji Hyul is confused about his feelings as instead of thinking about Min he’s thinking more about Ja Young. Sang Hyeon asks for Ja Young’s answer to his proposal. She’s about to answer when her dog runs away and goes to Ji Hyul who’s also following them. Ji Hyul confessed to Ja Young that Min is not his girlfriend.