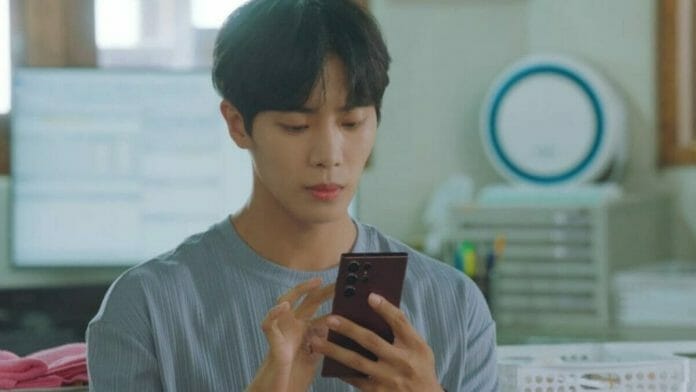 The episode starts with Ji Hyul saying Ja Young that Min is not his girlfriend. Ja Young asks if he came all the way there just to say that. Ji Hyul doesn’t have answer when Sang Hyeon asks what his relationship with Min then. He says she was his ex girlfriend and they have nothing now. Sang Hyeon is about to talk more with Ja Young when Ji Hyul diverts her with dog talks. She leaves with her dog while Sang Hyeon and Ji Hyul glares at each other. Ji Hyul at night wonders why he actually went there.

Next day, Min becomes friends with Ja Young and learns that they were of same age. She says about her strained relationship with Ji Hyul and asks Ja Young’s help to win back Ji Hyul. She puts on some make up and sees Ja Young has makeup kit which she didn’t use it all. She borrows it from her and also applies some for her. Min praises Ja Young for looking pretty but Ja Young is hesitant. Before leaving, Ja Young asks whether she should remove the makeup as it would create unnecessary talks but Min asks her to do what she wishes. Ja Young agree. Min asks for a coffe shop and Ja Young takes her to Sang Hyeon’s peach farm.

Sang Hyeon calls Ja Young pretty seeing her make up and clicks their picture together. Min thinks that they are cute couple and praises them. Yeon Hoon got drenched in water by Nurse while he was taking pictures. Min comes there and Seon Dong who calls her pretty. She says everyone in village says that she’s Doctor’s girlfriend but he don’t believe it as he always noticed how Doctor Han looks at Ja Young. Min gets upset hearing it. Ji Hyul sees Sang Hyeon’s picture with Ja Young and admires her pretty look when Min comes there. Ja Young’s colleagues also tease her got her new make up look. She goes to run some errands. Ji Hyul gets called for two different emergencies one for the recently born calf and another for a wild goat. Ji Hyul sends Yeon Holm to examine the goat while he goes to treat the calf. Min herself tags hee with him.

Ja Young sweats a lot after running errands for a grandmother but didn’t wipe it to preserve her make up look. She goes to the farm to find Ji Hyul and Min together treating the calf. She immediately washes off her make up and tries leaving but Ji Hyul stops her after seeing her. Min asks why did she remove the work for which Ja Young says she removed it while she was busy with work. Ja Young gers a call fo run another errand and the other person asks her to bring Sang Hyeon with her. Ja Young says Sang Hyeon is busy and says she’ll find someone else. Ji Hyul himself readily wants to jojn Ja Young and Min finds it weird.

Ja Young, Min and Ji Hyul were helping the women organisation ladies in making the peak wine. Min asks Ja Young about Sang Hyeon and Ja Young says he was literally everyone’s crush during school times. Min asks what about her for which Ja Young thinks and says in a way he’s her first crush too. Min teases her that her first crush is her last crush. A jealous Ji Hyul intervenes and says how’s it her last crush and reminds her about their time together. Ja Young shuts him and sends him to storage house while Min gets taken aback.

Ja Young clears that they were that childhood friends and Min sighs in relief. She gets called to taste the wine when Ja Young leaves to store remaining bottles. Ji Hyul follows her and asks whether she gave her answer to Sang Hyeon. Ja Young asks why would it matter to him for which Ji Hyul had no answer. She asks him to consider accepting Min as they both would go back to Seoul and can continue their relationship. Ji Hyul says he had no more lingering feelings left for her. Ja Young says being in comfort relationship is also better as a racing heart can he troublesome. Ji Hyul says that it’s love. He says he knew Min won’t quit unless and until she do it herself and that’s why he’s keeping quite.

Ja Young gets called and she leaves. She soon takes her leave unable to face Min. She gets corn boxes from Park and calls her for the same. Park says it was sent by her mother and she wanted to split it between her and Doctor. However Doctor refused and also scolded her for calling her orphan during the townhall meeting. She’s pissed off for the same while Ja Young smiles with Ji Hyul’s concern. Min comes to Ji Hyul and tries to convince him that they are the right pair. She immediately kisses him shocking him and Ja Young sees it. Ji Hyul gets worried seeing her.