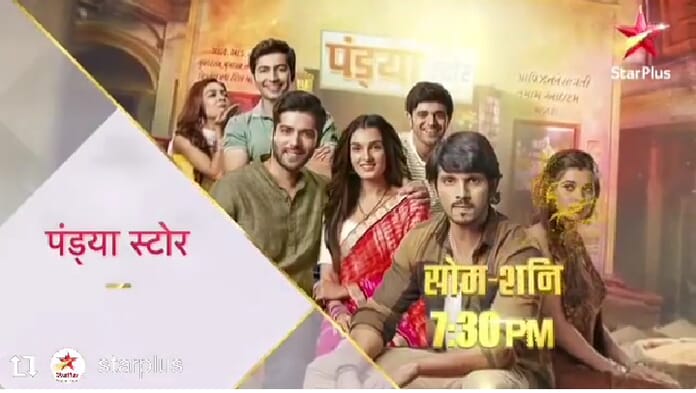 The episode starts with a customer asking Shiva about Raavi returning home and Shiva jokes. Gautam is surprised that Shiva didn’t react angrily hearing Raavi’s name. Krish phones Shiva and asks him to come to the college as there’s some issue with his attendance. Shiva agrees to come. Suman looks for Dhara and finds her ssleeping sitting in her room. Suman complaints that Dhara doesn’t care about her mother-in-law.

Suman closes the room door and says that she care for her unborn grandchild. The two ladies sneak into Pandya house. Suman sees them and ask who they’re. The two ladies says that they give give new vessels taking the old one. Suman says they don’t have any old vessels and asks them to leave. The lady says to take the vessels, even her neighbor exchanged her vessels. She offers to give two new vessels.

Shiva comes to Krish college. He meets Krish and asks what the problem is. Krish says that he missed his attendances because of the drama happened in the house after marriage. Shiva asks what he can do for that. Krish says Shiva to wait there and leaves. A girl meets Shiva and reminds Shiva about their childhood incident. Shiva remembers her and says Raaki. The latter says that she is working as assistant professor here. They talk about their childhood.

Rakhi says that she thought he will become engineer since he was good in studies. She asks why he left his studies in between. Krish and Raavi watch them from upstairs. Shiva recalls his childhood. Shiva asks Rakhi to leave the matter. Raavi is surprised to know that Shiva is good studies and wonders why he left the study.

The ladies praise Suman’s eyes beauty and hypnotize her. Suman gives them her bangles. They find that the bangle aren’t gold and returned it to Suman. They make Suman sleep and go to rob the house. In the college, Rakhi asks Shiva to keep meeting him and takes his leave. Krish and Raavi come to Shiva. Raavi asks why he brought her to Shiva on the pretext of meeting principal. Shiva warns to not spare Krish if it was his plan to make them meet. Raavi and Shiva decide to leave.

Krish drags them holding their hand. Krish pleads with Shiva and Raavi help him, to meet the principal as husband and wife. Shiva and Raavi agree. Krish hug them. Rishita tries to get an auto. She says that she’s getting late to give medicine to Suman, if she fails to reach home time, no one will trust her again. She stops an auto and gets to it. The ladies are robing the house. Someone rigns the calling bell. They go to check.

The ladies remove Dhara’s bangle. Dhara hold the lady’s hand, who try to remove the mangalsutra. The other lady try to release her friend’s hand in vain. She trows the apple on Dhara. The latter wakes up and shouts. The ladies tie Dhara up. They reveal that they thieves and know she is pregnant. The ladies open the main door to leave. Rishita ask who they are and sees Suman sleeping sitting. The ladies try to escape and Rishita try to close the main door.

Ptecap: Raavi is in the kitchen. Shiva comes there. Raavi turn and drops the plate and turmeric fall over them. Dhara says that they got applied haldi again on them and asks them to rethink about the divorce.