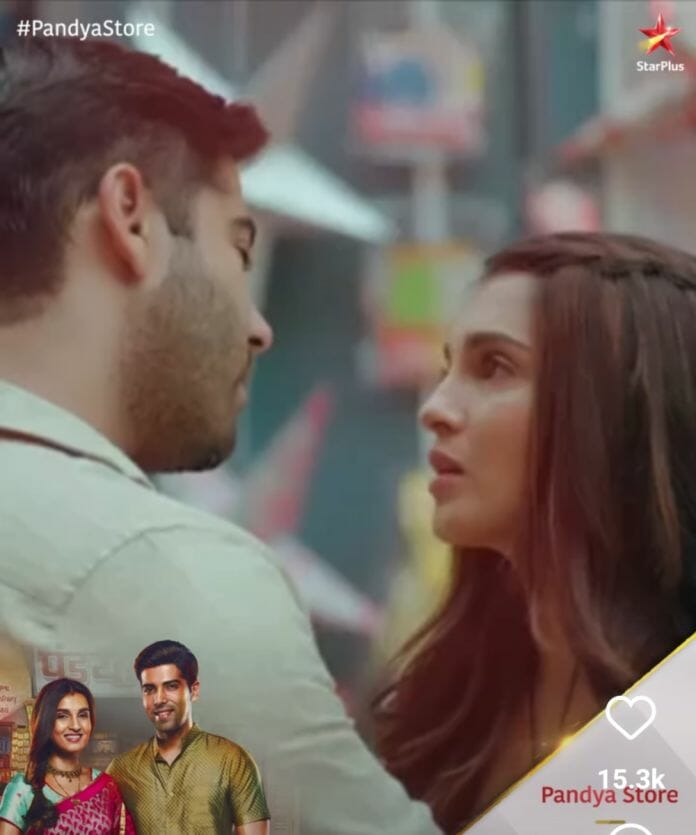 The episode starts with Kalyaani saying to Kamini that they should tell Rishita and Dev that Pandyas try to make them bad in front of their eyes. Janardan says that he offered Gautam job and he has audio recording of it. He says that they themselves got into the trouble. Kamini blames it’s him not them, she warned him. Kamini says that Pandyas will be overconfidence with their victory and will make any mistake, they have to wait for that then they will play the trick.

Dhara places one more stone and says that first time Rishita saw her mom and aunt’s true face and it’s their first victory. Raavi is making Suman’s hair. Suman moves her finger. Krish sees this and notifies it to Dhara. Family gets elated on seeing this. The morning Dhara says to Raavi that Suman hasn’t had breakfast yet and Banni hasn’t come yet. Raavi asks who is Banni. Dhara says that her friend who runs Banni chow home delivery. She is coming to visit the temple, so she ordered food for Suman from her. Just then Banni comes there.

Dhara welcomes her and introduces her to Raavi. Banni says that she felt bad hearing about Suman. She wishes to meet Suman first and feed food. Banni meets Suman. Dhara says to Suman that Banni is her friend and she needs her help. She tells about her home delivery business and says that different dishes are available. She asks Suman to taste Gujarati dishes and gives her opinion. Dhara says that it’s Banni’s dream and requests Suman ti help Banni.

The latter says that it’s actually her mother’s dream and asks if a mother won’t help to fulfill another mother’s dream. Suman ageees. Banni feeds Suman. Banni and Dhara smiles. Suman understands that Banni tricked her to feed her food and says the same to Banni. The latter says that one shouldn’t stay empty stomach. Suman says that she talks nicely and blesses Banni. Dhara thanks Banni and the latter takes their leave.

Pandyas come to Janardan’s house. Shiva says that they to do something again. Gautam says that they made cry Rishita cry last day, today they will make Dev cry. Raavi says that Gautam is good plotting. Kamini, Kalyaani watch Pandyas coming in. Raavi requests Shiva to take her a round in the car. Shiva says her to get the permission for that. Shiva expresses his love for Raavi and says that he can bear his and Gautam’s insult, but can’t tolerate if Kamini misbehaves with Raavi Or Dhara.

Rishita comes to the kitchen and sees the dishes list sticked on the fridge. She recognizes that it’s Dhara’s handwriting and says that all these dishes are eaten during the pregnancy. Dhara comes there and says to Rishita in her room. Rishita hugs Dhara and says that she’s taking care of her even in this situation. They have a talk. Kalyaani comes in saying to Dhara to press the clothes.

Rishita asks why Dhara should do this. She says to give in the laundry. Kamini comes and asks why they should give it in the laundry, it’s costly. Dhara says that she will press the clothes. Raavi comes there. Dhara says her to go to the market to get vegetables. Rishita says that Kriti can go. Raavi says that she will go with Shiva and asks them to understand her. Rishita smiles. Dhara gives Raavi money and she leaves.

Dhara is pressing the clothes. Kamini taunts Dhara. Dhara says to get all the clothes, she will press it. There Raavi comes to Shiva and says that she got permission to go to the market and says Shiva to take her for a long drive. Kamini complaints that Dhara didn’t press the clothes well and asks her to re do it.

Dhara does so. Kamini places her hand in the hot iron box intentionally and screams. Dev and Rishita arrive there and asks Kamini what happened. Pandyas also come and watch this hiding. Kamini says to Dhara that she could have scolded her if she’s angry with her, what is the need to burn her hand. Dev and Rishita look at Dhara shocked.

Precap: Pandyas records Kamini’s video in which she has Dhara’s mother’s necklace in her hand. Pandyas got ready. Dhara says to Suman that they will bring Dev and Rishita home today.