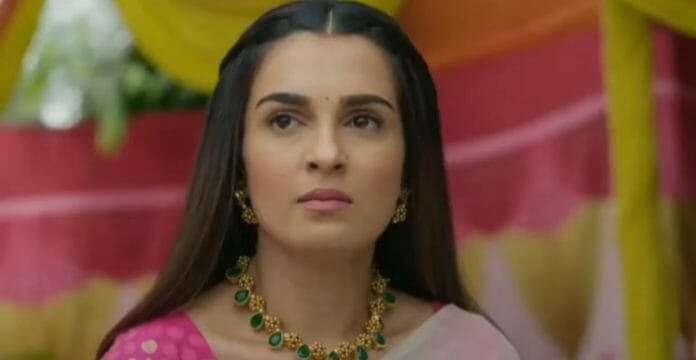 Star Plus’ popular show Pandya Store is gearing up for more drama with Kamini setting a trap for Rishita in order to accuse make Dhara bad in front of Rishita and Dev.

In the current story it’s seen that Kamini and Kalyani are shocked on seeing Rishita wearing Dhara’s necklace. They wonder how Rishita got it. Kamini goes to check if the necklace is in the cupboard. Meanwhile Kalyani covers Rishita’s necklace with her dress so that Pandyas don’t see it. Kamini gets shocked when she doesn’t find the necklace in the necklace. She gets scared of getting exposed and decides to prevent Dhara from seeing the necklace. The couple perform the puja. Janardan opposes when men want to perform the puja with the ladies. But Gautam support this. After completing the puja, they all play gabra.

Kamini gives thread to Dhara and asks her to tie it. Dhara understands that Kamini is plotting something, so she doesn’t tie the thread and places it on the table. Kalyani sees the thread and thinks that it’s good that Dhara didn’t tie it. Kamini sees it. She sends Kalyani away making some excuse and ties the thread by herself. Rishita falls into Kamini’s trap and is about to fall. But Dhara and Raavi hold her. Janardan thanks Dhara for saving Rishita. Kamini accuses Dhara of trying to kill Rishita’s child again shocking all.

What will happen next? Will Dev and Rishita believe Kamini? Will Pandyas be able to expose Kamini?