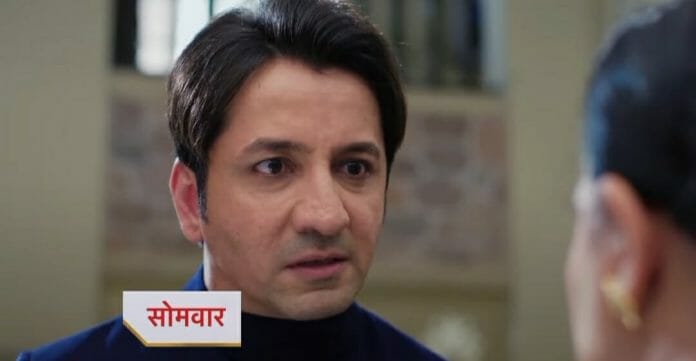 Star Plus popular show Pandya Store is gearing up for more drama with Krish getting determined to marry Kirti.

In the current story it’s seen that Rishita gets furious and raises her hand to slap Krish when the latter says that he will marry only Kirti. Dev stops Rishita and tries to calm her down. Raaci gets water for Rishita. The latter threatens to get Krish arrested for loving Kirti.

Krish says that even if they hang him, he loves Kirti and will marry her only. Rishita throws the glass at Krish out of anger. Krish takes a broken glass piece and write Krish loves Kirti on the pillar and leaves. Rishita complaints that they don’t scold Krish for his behavior out of love.

Gautam asks Shiva to go after Krish as he worries that he may go to Janardan’s house. Gautam gets mad at Dhara for supporting Krish instead of Rishita. Krish reaches Janardan’s house. Shiva asks him to rethink before going in. Krish is determined to marry Kirti. Shiva says to get Krish and Kirti married if Janardan agrees.

Krish confront Janardan and confesses his love for Kirti shocking Seths. To Krish surprise Janardan agreew for their alliance on the condition of Krish cutting all tiew with the Pandyas after his marriage with Kirti.

Meanwhile Suman also blames Dhara’s upbringing for Krish’s act and she did mistake by hiding this matter from her. Gautam agrees with Suman whereas Raavi defends Dhara. Later Pandyas are stunned when Krish says that Janardan agreed to get Kirti married to him.

In the upcoming episode it will be shown that Janardan will say to Prafulla that he will snatch Pandyas dear Krish from them for snatching his daughter from him. Other hand Shiva will throw Krish’s bag and will ask him to leave. Krish will demand to give his share of poverty to leave silently shocking the family.

Will Janardan get successful in his evil intention? Will Krish cut all ties with his family for Kirti?