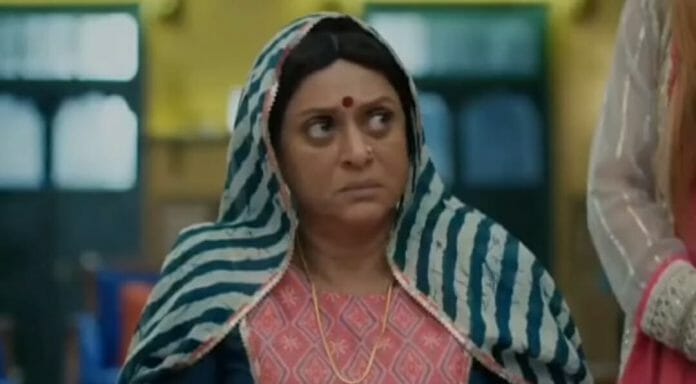 Star Plus’ popular show Pandya Store is gearing up for more drama with Suman objecting to Krish marrying Shweta.

In the current story, it’s seen that Shweta agrees to marry Krish. Suman asks how Shweta changed her decision suddenly. She says that this marriage won’t take place and asks Shweta and her parents to leave the house. Shweta imagines her parents abandoning her on the road. She starts her melodrama.

She declares that she doesn’t love Krish, but she realized that she was attached to the Pandyas after going to her house. She begs Suman to give her approval and asks the Pandya brothers to convince Suman. Rishita and Shweta’s parents are stunned to see her acting skills.

Meanwhile, Rishita takes Dev aside. She says that Shweta’s parents must have brainwashed Shweta to marry Krish. Dev refuses to listen to Rishita as he is convinced that Krish loves Shweta. Shweta continues her acting and tries emotional blackmail on Suman by stating Pandyas named Chiku’s name.

Rishita warns Suman not to get trapped in Shweta’s acting. Dhara and Pandya’s brothers also try to convince Suman. Suman accuses Dhara of supporting Krish for Chiku and stays firm in her decision. Shweta is happy that Suman didn’t agree and starts leaving, but Krish stops her in her midway.

In the upcoming episode, it will be seen that Krish will ask Shweta if she’s sure about her decision to marry him. He will ask if she won’t regret it in the future. Shweta will remind Krish of his own words about having their whole life to understand each other and will say that she won’t have time to regret it.

Krish will decide to marry Shweta immediately in the temple. Suman will oppose Krish’s decision, warning him to throw him out of the house and cut all ties with him if he marries Shweta.