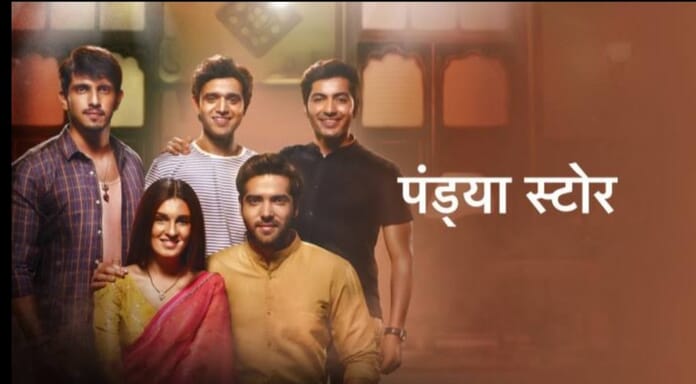 This week begins with Dhara opposing for getting a maid. Suman shuts her mouth asking her to rest. Gautam asks Krish to sleep in Suman’s room as she must be scared after robbery attempt. Krish sees Shiva closing the main door and teases that he is worried for Raavi. Later Suman asks Krish what he was talking about in the hall. Krish reveals that Raavi sleeps in the hall, not in her room. Suman hopes that Raavi and Shiva’s relation gets fine. Shiva gets worried that Raavi may get scared to sleep alone. He leaves his room door open and talks loudly so that Raavi can hear him and doesn’t get scared.

Dhara witnesses the fight between Kanta’s son and daughter-in-law. Kanta requests Dhara to save her son. Kanta’s daughter-in-law says that her husband got into an affair with another woman while she was taking her of their baby She alerted Dhara that Gautam can also do like this with her. She complained that her husband stopped praising her after she got pregnant. Dhara got thoughtful hearing this and leaves from there. Raavi gets brinjal from market with krish and decides to make a surprise dish for the family. Raavi decides to keep Dhara away from the kitchen till she finishes cooking vthe dish. Anita phones Raavi and asks her to give Dhara the fruits that she bought. Raavi agrees. Raavi cuts the fruits and gives it to Dhara. Shiva gets happy on seeing this.

Raavi is cooking. Shiva comes to the kitchen and sees Raavi. He comes close to Raavi due to which Raavi drops the haldi plate and the haldi gets over them. Dhara comes to the kitchen and scolds them for wasting haldi. Then she says that even haldi signs that they should stay together and asks to rethink about divorce. Later hara gets angry on seeing Raavi changed the spicies places in the kitchen. Raavi tries to calm her and says that she’s going to handle the kitchen till Dhara’s delivery, so she will arrange it according to her wish. Dhara gets sad hearing this and starts crying. She leaves getting upset. Dhara hears Gautam saying to krish about women’s skin changing during pregnancy and gets worried. Anita comes to meet Dhara to know if she had fruits. Dhara gets angry when Anita comments about Dhara’s face. Later Raavi explains to Anita that Dhara easily gets irritated and feels insecure due to pregnancy. Anita gets elated thinking the miraculous medicine is working.

Pandya family having the meal. Suman tells about Kanta’s son having affair with another woman after his wife got pregnant. Dhara gets worried hearing this. Gautam and Shiva praise the sabsi and ask to serve it more in order to change the topic. However Dhara gets angry. She says Raavi made that Sabsi. They never liked brinjal sabsi when she used to make it. She bursts into tears. She says sorry to Raavi and leaves from there. Anita sees Krish going back home with the medicine Gautam asked to buy for Dhara. Anita stops Krish and engages conversation with him to know what he bought. Krish drops the cover and Anita notices the face cream and hides it. Later Krish hands the medicine to Gautam in front of the family. Suman teases him. Gautam goes to Dhara and she argues with him for praising Raavi’s sabsi and not hers. Gautam tries to console her and gives the medicine he bought for her. Dhara checks the cream and finds the box is empty.

Later Dhara asks Raavi why she left Shiva, why she doesn’t like him that much. Raavi admits that she had problem with Shiva’s dressing style and life style in the beginning, but later it didn’t matter to her. Dhara says that Shiva thinks that Raavi still has problem with it and advises to talk to Shiva and clear the misunderstanding. Raavi says that Shiva has inferiority complex and refuses to talk to her. Other hand Shiva stops at a clothing shop and looks at the stylish men wears. Rishita sees this. Anita tries to create fight between Gautam and Dhara by revealing that Krish told her about Gautam asked to buy him a beauty cream for Dhara. Krish didn’t get it in the market, but she got it and brought it for Dhara. Dhara gets angry and applies the cream immediately and gets allergic reaction. Gautam convinces Dhara in a mature way.

Rishita misunderstands Dhara when Dhara refuses to get her the bangles that she liked. She gets angry and decides to work. She attends an interview and accepts the job offer. Dhara feels guilty of not getting the bangles to Rishita. Raavi tells Dhara that Rishita went for job interview. Dhara gets happy hearing this. Raavi hopes that Rishita doesn’t start her work the next day as she has her divorce hearing the next day. Dhara worries about Shiva and Raavi relationship. Janardan man informs him that they’re facing loss in the business due to Gautam. A raged Janardan phones Gautam and threatens. Shiva and Dev rebuke Janardan and tell him that Gautam will participate in the union election against Janardan.

Dhara tells Suman that Shiva and Raavi’s court hearing is next day. Suman decides to get Shiva remarried and calls the priest and asks to bring girls photos. Raavi hears this and feels bad. Rishita comes back home and distributes sweets to everyone saying she got job. Dev argues with her. Dhara gives her bangles. Rishita refuses to take and leaves getting angry. Raavi gets milk for Shiva as Dhara asked her to do so. The latter is impressed the way Raavi handling the house and the family. Shiva asks Raavi to drink the milk. Raavi drinks the half milk and leaves giving the remaining to Shiva. Later Raavi gets sad when Suman says that she’s going to meet the priest to find an alliance for Shiva second marriage.