In the current story it’s seen that Anita scolds Shiva for calling Raavi lizard. She tells him to behave well with Raavi. Gautam and Dhara question the brothers about when the workers will happen. Shiva, Dev and Krish declare that they will construct Gautam and Dhara’s bedroom. Family gets happy hearing this while Rishita gets irritated. She tells that they aren’t professionists. Dev says that they have studied about it on the internet.

The brothers start working. Raavi brings tea for them. In the evening Gautam notices that the sky has turned grey and it’s going to rain. He tells his brothers that they have chosen wrong time to build the bedroom. Their efforts will go vain if it rains. However Shiva and Dev are confident that it won’t rain. The brothers, Suman and Dhara look shocked when they hear the thunder sound.

In the upcoming episode it will be shown that that the Pandya brothers will be on the terrace. They will be placing the bricks to build the wall. The brick will fall down. Dhara will notice this and will shout mom. The brothers will look shocked as well. Suman will look above her head shocked.

What will happen now? Who will safe Suman? Will Suman get injured?

Keep checking this space for more news about your favorite Hindi shows. 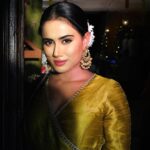