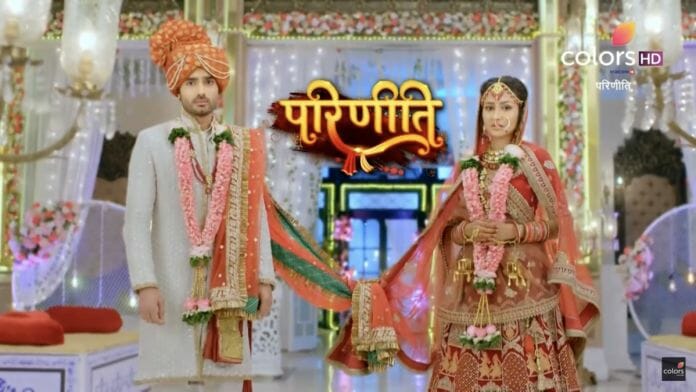 In the previous week we have witnessed, Rajeev said to Parineet it was not important to share how much thet meant to be each other to others. Parineet thought who was that girl with him?

Rajeev said to her he can guess what was she thinking about? She may be guessing who was that girl with him? What did he doing in the couple resturant? Parineet felt like she was caught? He lied to her he helped his friend’s wife to reach resturant.

They were married recently so he helped them he thought to call Pari for help but changed his mind thinking she would have helping Mishika. Parineet thought she misunderstood him and failed to trust her love.

Later Neeti thought Sanju not sharing his problems with her. Rajeev intentionally spill juice on Pari and took her inside Men’s washroom prevent her from meeting Neeti.

Neeti called Parineet he pretended like romancing with Parineet and turned off her mobile. Neeti thought to check in men’s washroom once.

Neeti changed her mind to check washroom. Rajeev pretended like romancing with Parineet to divert her. Rajeev was about to stop his acting but noticed Neeti there. He pretended like praising Parineet’s dressing sense.

Neeti left from there thinking Sanju was waiting for her. Neeti called Rajeev he excused Parineet there reasoning boss calling him. Parineet doubted how could someone will be busy always and whom will trouble a staff like this?

Meanwhile Rajeev collected office car and said to Neeti let’s go for a long drive. Monty came there to pick Parineet there. He picked Parineet from there. Parineet thought she suspected Rajeev unnecessarily.

Neeti asked Rajeev to buy ice cream for her. He refused to eat it. Monty saw them together and decided to took Parineet from there before getting caught. He stopped Parineet from meeting Neeti reasoning Mishika waiting for her.

Later Rajeev dropped Neeti in home and left. She thought what will she do if Sanju betray her. Meanwhile Parineet felt guilty for suspected Rajeev unnecessarily.

Parineet came to temple apologise to god. Neeti called her to learn what happened yesterday? Parineet assured to her she was alright! Neeti asked her Is she found out Rajeev red handed?

Parineet said to her that Rajeev only loving her but she doubted him unnecessary. Neeti asked her don’t trust him blindly. Parineet enquired about her first night? Neeti shared everything to her.

Later Neeti learnt from her she was in temple. Neeti came there to meet her. Neeti enquired Parineet about Rajeev. Parineet blindly supported Rajeev in front of Neeti. Neeti made Parineet understand that Rajeev was cheating her.

He fooled around her. Parineet swear on god that she will punish him if he betraying her. Later Rajeev met his friend and his girlfriend. He invited Rajeev to attend his Sangeet with his wife.

Rajeev went to meet Neeti. She informed to him that she wanna join back to work for emergency schedule. Rajeev asked her to attend Naman’s Sangeet function with him. Neeti refused it reasoning her work.

Neeti made fun with him bringing first night matter. He got provoked and argued with her bringing Parineet matter and left from there. Meanwhile Parineet saw Rajeev talking with someone in phone angrily.

He thought to take Parineet with him to attend the function. He invited her but Parineet thought she might attend it to keep an eye on him. He asked her to get ready well to keep everyone eyes on her.

Parineet contacted Neeti and said everything to her. Neeti informed her she refused to go with Sanju but now she got leave extension so she will attend the sangeeth with him. Later Neeti met Rajeev in office and spend time with him.

Rajeev got panic thinking how will he stop Parineet from accompany him. Parineet helped Natasha to select dress. Meanwhile Neeti caught Rajeev red handed when did he called to Parineet.

Neeti asked Rajeev where did he lost? Rajeev lied to Neeti that he was thinking which dress she gonna wear in Sangeet. She praised him for always thinking about her. He saw Parineet there and drove the car faster without stopping it.

Neeti scold him for not stop the car and contacted Parineet. Parineet saved Natasha from accident. She thanked her and pleaded her to attend her Sangeet. Parineet promised to her. Meanwhile Neeti said to Rajeev she wanna select dress to wear in Sangeet.

Rajeev asked her to wear sari for him. She demanded him to stay with her day and night for return he denied it. Later he helped her wear that dress. Parineet dreamt like Rajeev helping her to wear the sari.

Later Neeti contacted Parineet and discussed about their plan to caught Rajeev red handed. Later Rajeev admired Parineet look. She helped him to select dress. He hesitated to tell her he cancelled the plan. Parineet overheard Rajeev talking with someone else.

Parineet doubted Rajeev had affair with someone that’s why he said I Love you to that person. Rajeev got alert hearing her sound. Parineet asked him doesn’t she a good wife to him? Is she lack anywhere?

He said to her she misunderstood him. Parineet denied it. Rajeev said to her he can’t able to take her to function reasoning his friend marriage called off. He lied to her that he said I love you to him to console him.

Later Rajeev and Neeti met Naman and congratulated him there. Parineet helped Seema and introduced herself as Natasha’s friend. She thanked for saving Natasha’s life.

Parineet went to talk with Natasha but lights turns to off. Natasha’s father gave a speech about his wife and praised their relationship there. Parineet felt happy to see them together.

In the upcoming episode viewers will see; Natasha’s father will announce to all that today one important guest came here. He will introduce Naman’s childhood friend Sanju.

What will happen next? When will Rajeev confess the truth to Parineet? How will Parineet accept the truth?