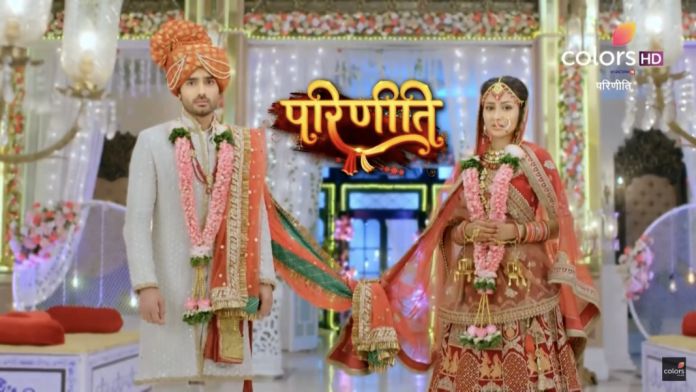 The episode starts with Rajeev gets shocked seeing Parineet there and leaves Neeti. Neeti asks him what happened? He excuses her to meet Naman. Neeti doubts what happened to Sanju out of the blue he was romantic with her. Meanwhile Natasha’s father phones to Monty’s girl friend. He enquires her where is she? She informe to him that she is waiting for him in 303. Naman hears his conversation and doubts everyone is in second floor what’s he gonna do in third floor? Rajeev comes there to ask Naman help but he shares his problems with Rajeev.

He assures to manage Natasha and send Naman from there. Rajeev calls Monty for help. Monty thinks that Rajeev don’t like him being happy with his girlfriend. He is troubling him for his two wives. Monty tells him that he is on his date he will come back in 15 minutes. He asks Monty where is him? Monty tells him that he is in 303. What’s he doing in that room? He thinks that Monty will get caught if Naman goes there. Rajeev follows him behind to stop him. Parineet notices Sanju running somewhere she follows him behind to caught him red handed. Monty waits for his girl friend and gets shocked to see Seema there. She misunderstands him as thief.

Naman notices Natasha’s father going inside with a girl. Rajeev stops him from going inside. Here Monty says to Seema that he came to wrong room. His girl friend is in 303 room. Lets go to that room and checks her there. Rajeev says to Naman that one guy is inside the room not girl friend. Naman says to him how will he maintain relationship with guy? It’s his brother. Natasha will be broken if she come to know it. Meanwhile Seema brings Monty there. Rajeev asks him what’s he doing here then who is inside? Seema asks Naman Is he cheating her girl? He deny it. Seema opens the door and gets shock to see that girl with her husband. She doubts him. That girl inform to her she is life insurance agent. Monty thinks that he misunderstood her as call girl Seema gets angry on them and leaves. She demands money to them. Rajeev ask her how much?

She demands Rajeev to give 25 thousand to her or else she will give police complaint against him. Parineet comes there and notices them together. She doubts what’s Monty and Sanju doing together? He has affair with Shreya and now this girl. Definitely his character is not good at all. Later Neeti and Natasha notices Seema is in angry. She shares to them that her husband ruined her mood today. He goes to stage and sings a song for Seema to impress her.

Naman and Natasha dances together. Neeti thinks that Parineet has no idea where is Rajeev? She searches for Sanju there. He comes there and dances with her. Parineet dreams like she is dancing with Rajeev. She comes back to earth and dances with everyone there. Rajeev stops dancing seeing Parineet there. She leaves from there without giving heed to him. Rajeev drinking there. He notices the chandelier about to fall down and alerts Neeti but she didn’t listen his voice in loud noise. He saves her from that accident but gets panic seeing her faint. Everyone attentions turns to them. Rajeev asks Neeti to open her eyes. They asks Rajeev to check his hand it’s bleeding but he is not giving heed to them and worries about Neeti. Parineet comes there and misunderstands Chandelier falls on Sanju. Sanju gives mouth respiration to Neeti to save her. She hugs him in fear. Parineet comes there and gets surprised to see Rajeev there.