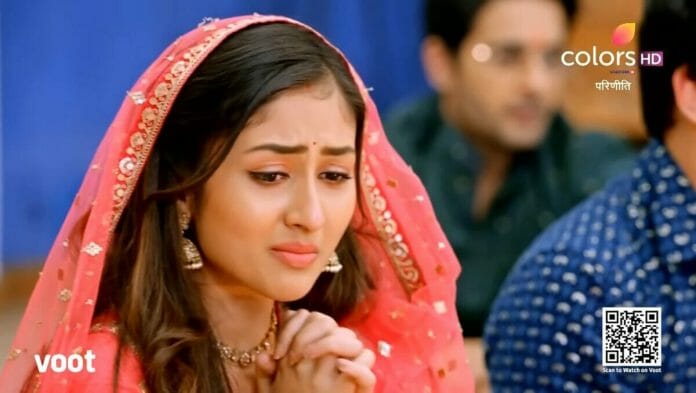 Parineeti is Colors TV’s popular show. This show never fails to entertain its audience with a unique story line. Now, the series focuses on Parineet to fall into Gurinder’s trap

In the recent episode we see; Rajeev inquiring the priest when will pooja end? Biji asks him why is he asking about it? Does he wanna use washroom? He lies to her as he wants to use the washroom. Biji brings his childhood incidents. Rajeev asks her to stop it. The priest informs them that pooja is completed. Biji signals something to the priest.

The priest informs them that Rajeev and Parineet wants to take 7 vows around the sacred fire. Rajeev asks her what’s the need to do it? Biji says that they are always fighting with each other. So she thinks it’s the only solution to bring understanding between them. Parineet tells her it was past.

Biji is adamant in her decision. Rajeev thinks that already he took 7 vows with Parineet and 7 with Neeti. He will get divorce from her for sure. He asks Parineet to convince Biji.

She shares with him that Biji is adamant in her decision. Later, Neeti gets angry on Rajeev for take blessing from Biji along with Parineet. He somehow manages to lie with her.

In the upcoming episode viewers will see; Priest will inform to Biji that she ruined their tradition. She added garlic in the Halwa. Everyone will get shock to hear it. Gurinder will complaint that Parineet ruined their family name. She will provoke Biji against her.