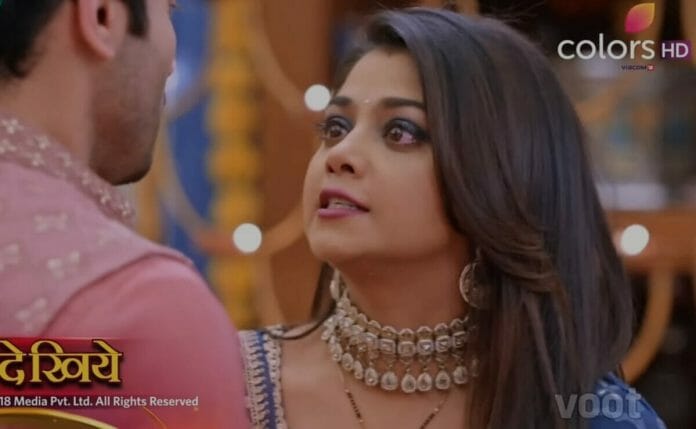 Parineeti is Colors TV’s popular show. This show never fails to entertain its audience with a unique story line. Now, the series focuses on Gurpreet to confront Rajeev

In the recent episode we see; Neeti frustrated, thinking about Sanju’s behaviour. Rajeev comes there to check whether Neeti is angry or not? Neeti shows her anger at him and says that he is mean to her today. Rajeev apologizes to her for teasing her in front of everyone. He tries to be romantic with Neeti.

Parineet comes there and is disappointed to see them close to each other. Neeti thinks that Parineet will remember Rajeev seeing them in that position. Rajeev excused them. Neeti asks Parineet why is she here? Parineet tells her that she wanted to inform her that she had given orders for rangoli colors.

Neeti asks her. Doesn’t she remember Rajeev seeing them in such a position? Parineet clears with her that she doesn’t want to remember him. She doesn’t want to get him back in her life. Neeti advised her to not sacrifice her life for others. Parineet tells her that he is loving her and becoming a father to her child.

Neeti says to her that she is using that child to threaten her. She suggests Parineet carry Rajeev’s child. A child is a weakness to every husband. She adds that Sanju loves her already but he is showing extra care for her after she becomes pregnant.

Parineet leaves from there. Later, Rajeev helped Parineet to draw rangoli. Gurpreet reaches to her home and confront Rajeev for his deeds.

In the upcoming episode viewers will see; Gurpreet will reveal the truth to Neeti. Neeti will question Sanju how could he betray her friend Parineet to live with her? Sanju will tell her that he don’t love Parineet. Gurpreet slaps him. Parineet will request Neeti to accept Sanju but she denied it.