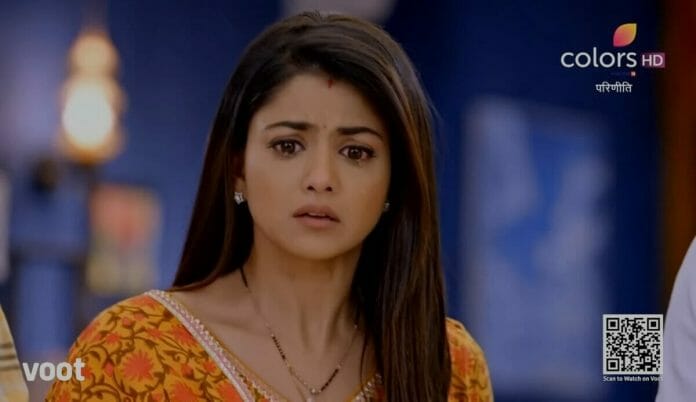 Parineeti is Colors TV’s popular show. This show never fails to entertain its audience with a unique story line. Now, the series focuses on Parineet will be in danger

In the recent episode we see; Parineet contacted the call centre but they refused to help her. Parineet lost her hope and shouted for help. Later, Biji created a problem in home after Monty revealed to them Leo kidnapped Parineet. Gurinder prayed for Rajeev safety after heard goon stabbed him.

Later, Seema contacted Parineet and assured to help her. She shared the location with her. Rajeev consoles Neeti and advises her to stop taking stress. Seema visited Rajeev house. She demanded them to give money to reveal Parineet’s message.

Monty informed Rajeev about it. He settled money to her. She revealed to them that she was locked inside a box. Meanwhile, Rakesh argued with Alahawat for killed Parineet. Leo fought with Rakesh. Later, Neeti decided to confront Alahawat.

In the upcoming episode viewers will see; Neeti will confront Alahawat. She will reveal him that Parineet is alive. She will demand him where did he hide her? Rajeev will tell her that he won’t give any information to us. Leo will share the location to Alahawat after Neeti left. Rajeev will save Parineet