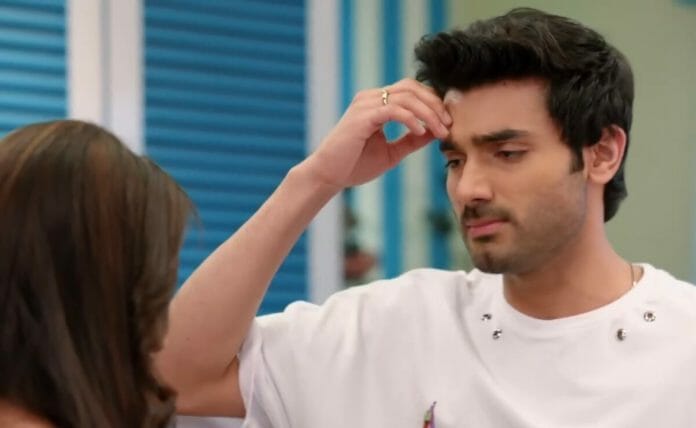 As reported earlier it’s shown that Parineet requesting him to not talk in that way and tells him that he is everything to her. Rajeev promises to never get angry with her. He makes her sleep on the bed. He prays to god to make Parineet leave him. The next day, Parineet feels happy meeting her family members. Rajeev goes aside to attend Neeti’s call. Neeti asks Sanju if everything is fine. He tells her that everything is fine. Neeti asks when he is planning to make her meet with his family. He tells her it takes some time. Neeti tells him fine. He flirts with her. Neeti sees Pari call and tells him that she will call him later. He asks if she got a call from the airlines. Neeti says no and it’s an important call and disconnects the call. He thinks who can be important to Neeti more than him. Gurpreet handovers Jewellery boxes to Parminder which Jaswant prepared for Parineet. Monty sees Rajeev and asks him what happened. Rajeev tells him Neeti disconnected his call getting someone call. Monty says Parineet loves you more than Neeti as Neeti disconnected your call. Rajeev shuts him. Monty says Neeti may be hiding secrets like you’re hiding from her so get to know from Neeti who’s that important person and steal her phone to know her secrets. Neeti calls Pari and asks her to tell her about her Sasural. Pari asks her to come to meet her Mom. Neeti asks her to send her address.

In the upcoming episodes, viewers will witness Pari will ask Rajeev to send their address to her friend. Rajeev will send the address to Neeti. Neeti will get shocked seeing the message. Rajeev will shout at Pari, saying why do you keep crying, I already frustrated thinking who is important in her life. Pari will ask whose life.

Will Neeti find the reality of Sanju? Can Parineet understand the reason behind Rajeev’s anger?