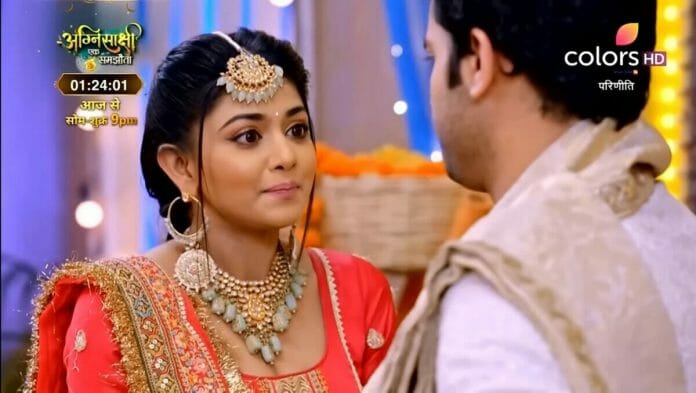 Parineeti is Colors TV popular show. This show never fails to enter tain its audience with a unique story line. Now, the series focuses on Parineet lashes out at Neeti

In the recent episode we see; Sukhwinder and Gurpreet were discussing about their married life. Sukhwinder felt bad seeing Parineet celebrating her first lohri without Rajeev. Gurpreet cleared with her Rajeev was here. Sukhwinder denied it reasoning Neeti informed her he gone out. Both were arguing with each other over this issue. They decided to confront him.

Rajeev smelled their plan and escaped from there. Meanwhile, Biji invited everyone to take Pehras. Biji asked Parineet to hold Rajeev’s dhuppatta. She hold it for her sake. Sukhwinder took that from her hand.

Vishal came there to support her. Gurpreet got suspicious seeing Vishal. Later, Neeti demanded Vishal to take dinner with Parineet but he excused her.

In the upcoming episode viewers will see; Vishal will insult Rajeev for being selfish. Parineet will ask them to stop arguing. Meanwhile, Neeti will misunderstand the situation and argue with Vishal. She will blame him for betraying Parineet. Parineet will ask Neeti to stop interfering in her life.