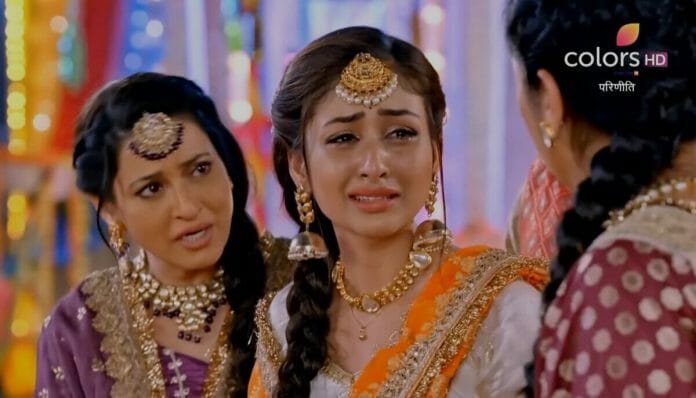 Parineeti is Colors TV’s popular show. This show never fails to entertain its audience with a unique story line. Now, the series focuses on Rajeev to lose his cool

In the recent episode we see; Neeti greeted Gurpreet and shared her happiness with her. Rajeev lies to her that he was helping Neeti to remove the dirt from her head. Neeti questioned him for lying to her? Rajeev said to her that he was embarrassed to narrate the scene. Later, Gurpreet got suspicious with Neeti asked her to make a video call to Rajeev. Parineet diverted her.

Parminder felt bad for Parineet. She said to her that she was sacrificing her happiness for Neeti. Neeti went to call her mom. Neeti informed to Parineet that Sukhwinder coming to meet her. Biji asked Rajeev and Parineet to take Pehras. Neeti saw them together. She confronted them. But Parineet lied to her that she doesn’t have any relationship with Sanju.

Biji revealed to them Parineet and Rajeev were husband and wife. When they pressured Parineet she revealed the truth to Neeti. Gurpreet fainted in shock. The doctor announced to them she was dead.

In the upcoming episode viewers will see; Parineet will watch Neeti and Rajeev taking Pehras together. Rajeev will notice Parineet in tears. Neeti will step on a burning log. She couldn’t continue the Pehras with Rajeev.

Rajeev will inquire about Neeti’s baby? Biji will ask them whose baby? She will humiliate Neeti in front of everyone. Rajeev will lose his cool and stop Biji.