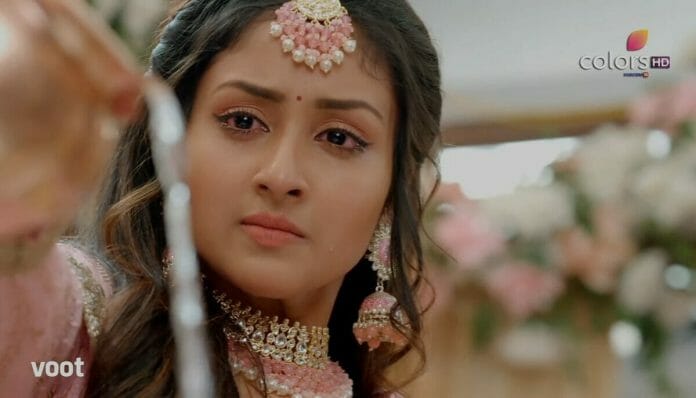 Parineeti is Colors TV’s popular show. This show never fails to entertain its audience with a unique story line. Now, the series is focusing on Parineet to stop the wedding!

In the previous episode we saw, Rajeev said to Grandma that he was married few months before. Grandma was adamant to perform the wedding. Parineet hesitated to answer Grandma. Chandrika tried to support Parineet but Grandma insulted her. She wished to confess the truth. Harman and Mandeep visited Gurinder house surprising all.

Parineet thought she couldn’t confess any truth to them. Gurinder demanded Parineet to say does she like him? Parineet agreed to marry Rajeev for family sake. Rajeev noticed Parineet ignoring him. Rajeev confronts Parineet but she refused to answer him.

He got angry on her. Parineet gave fitting reply to him. Neeti called him on time but Parineet mocked at him. Rajeev doubted she may be learnt the truth. Later Parineet overheard Rajeev mentioned I love you to Neeti. She was hurt to hear it. Later Rajeev’s mom visited home.

In the upcoming episode viewers will see; Rajeev will overheard Parineet’s conversation with Chandrika and take her from there. Parineet will pour water on sacred fire and announced that she don’t wanna marry Rajeev. She will question him why didn’t he informed to everyone he was married twice and he have two wives.