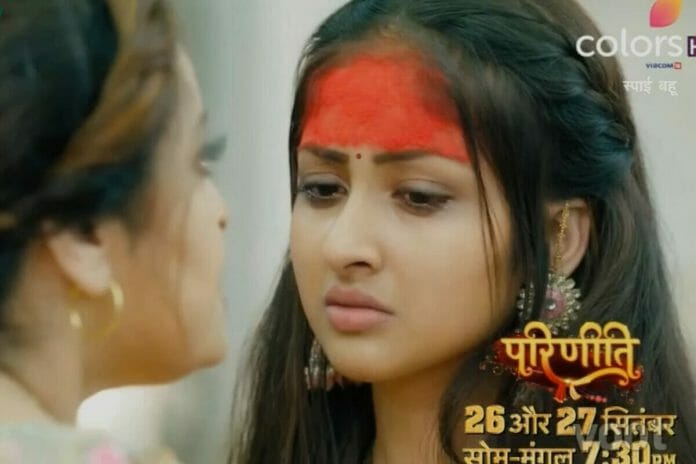 Parineeti is Colors TV’s popular show. This show never fails to entertain its audience with a unique story line. Now, the series is focusing on Parineet to reveal the Truth!

In the recent episode we see; Parineet saying to Rajeev that she will die. She realises that she has hallucinated him near her. She shouldn’t get his thighs again. She doesn’t wanna live. Neeti wakes up from her nightmare. The nurse inquired her what happened to her?

Neeti shares with her that something is wrong. She wants to contact Parineet asap. She tries to dial her but she does not get her call. Neeti shares her fear with Neeti. The nurse reveals to her that Parineet had come to meet her but she was sleeping in medicine effect.

That’s why she left from there. Neeti doubts something is fishy. She won’t go anywhere without meeting her. Meanwhile, Tai ji is adamant to meet Parineet. Chandrika shares with her that Rajeev went out to search for Parineet.

Tai ji prays for Parineet but the lamp blows off in the breeze. She fears something may happen to her. Later, Rajeev feels guilty for his deeds. Neeti talks with him but he disconnected the call.

Neeti gets panic attack in tension. Nurse alerts Rajeev about it. Later, Rajeev reached to temple and learns from Priest about Parineet. He alert his family members about it. They asked police to help them.

Later Tai ji will assure Parineet that Rajeev accept her and treat her well. She will make sure Rajeev divorce Neeti. Parineet will request her to accept Neeti as her daughter in law reasoning She is pregnant.