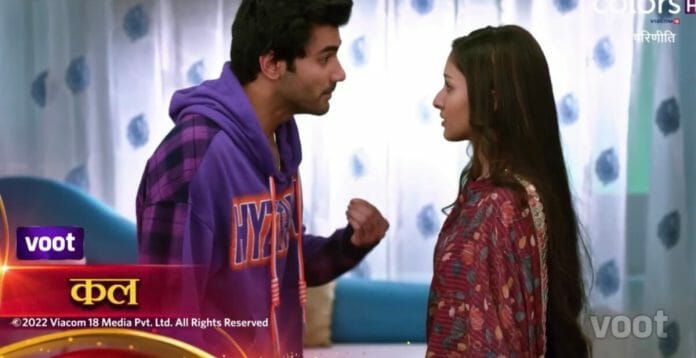 Color TV’s popular show Parineetii is witnessing an interestingtrack where Rajeev sneaks out of the house to meet Neeti.

As reported earlier it’s shown that  On the way, Neeti calls Parineet but she doesn’t attend her call. She messages the venue address of the Party to Parineet. She plans to surprise Parineet and her husband by going to their place with Sanju. Rajeev sneaks out at the night to meet Neeti. Rajeev arrives at the party and apologizes to he then he proposes to her saying he loves Neeti so much and can’t imagine his life without her. Everyone asks him to kiss the bride.
Parineet has a terrifying dream that Rakesh is harming Rajeev. She wakes up in shock and finds Rajeev is gone. A vase falls on the floor because of her. Parminder comes out and warns her to not spoil others’ sleep. She leaves. Pari feels apologetic for spoiling her sleep. Rajeev kisses Neeti on the forehead which impressed her a lot. She tells him that he is reminding her best friend’s husband. He says her to make him meet him.

Neeti plans for a surprise meeting. Chandrika comes out. She asks Parineet what happened. Parineet hugs her in tears and tells her how much she is worried for Rajeev. Everyone asks them to dance. Rajeev dances with Neeti. He tells her they share their first kiss on their wedding night. Everyone claps for them. Rajeev goes aside after seeing Chandrika call and feels frustrated thinking Parineet may did something at home.

In the upcoming episodes, viewers will witness Rajeev will shout at Parineet and reveals to her that he just married her for the land and his freedom. Parineet will stand in disbelief and asks him to not say it in that way. Rajeev will say he has nothing to do with her and asks her to get lost from his life.

Will Parineet leave from Rajeev’s life? Will Neeti find the reality of Sanju?