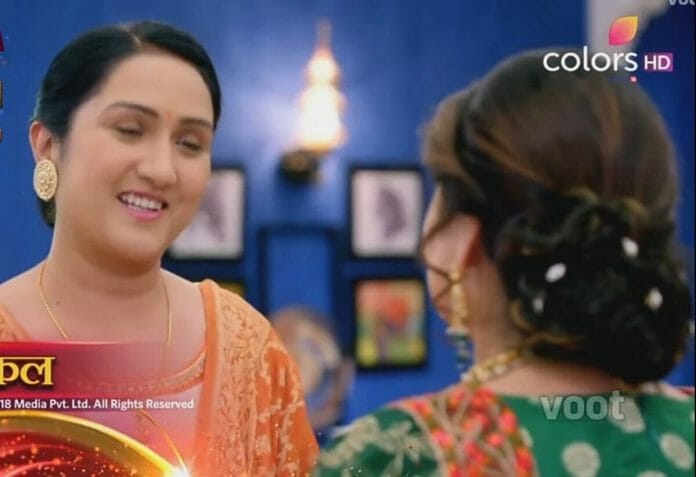 In the previous episode we saw; Rajeev got disturbed by Parineet’s thoughts. He decided to thank Parineet for her food then only he will get relief. He called to Parineet and thanked her for the food then disconnected the call. Parineet got excited after his call and shared her happiness with Neeti. She praised Rajeev in front of her. Neeti teased her and asked her who was important to her? Parineet said that she had special place in her heart.

Neeti don’t like any design and wore Parineet’s nuptial chain. Old lady advised her it’s bad omen she might return her nuptial chain to her
She narrated the consequence to her but Neeti didn’t give any heed to it and convinced Parineet. She explained to her its their belief. They left after purchased nuptial chain. Sanju surprised Neeti by prepared tea for her. Neeti informed to him that she invited her Mom to attend her wedding reasoning she was everything to her. She had dreams for her.

Sanju agreed to her wish. She thanked him and said he was best to her. He hugged her and left from there. Rajeev attends the conference call. Parineet informed to him about the cultural consultants. He gave permission to her thinking she won’t disturb him. Later she helped him to sleep properly when he slept while attending the call. Next day Rajeev admired Parineet forgetting him.

In the upcoming episode viewers will see; Sukhwinder will inform to Neeti that she will stay there itself if she don’t come to pick her. Neeti will assure her fiancee come to pick her up. Sanju will meet her and take blessings. He will rush behind the pick pocketer to help her. Parineet will take Sukhwinder to her house she will invite her family to attend Neeti’s wedding.

What will happen next? Will Rajeev get caught? Will Sukinder find out the truth?