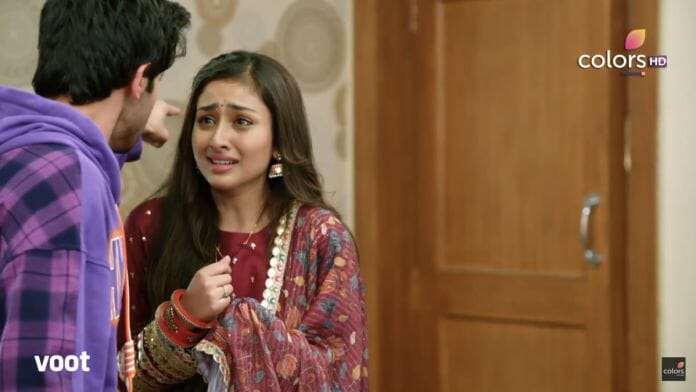 As reported earlier it’s shown that Rajeev disconnects Chandrika telling he is at Garage. Parineet goes to search for him taking Chandrika’s phone. Friends ask Rajeev to make promises to Neeti again. He agrees. The guard stops them and calls one of their friends to remove the vehicle from the way. Rajeev gets angry at him. Their friend goes with the guard. Parineet comes to the garage and notices it’s closed. She asks Guard if he saw her husband showing him the photo. Guard tells him he is inside. Parineet feels happy and wipes her tears. Friends ask Rajeev to promise Neeti again. Rajeev asks Neeti to not remove her engagement ring. He promises her with another ring that he will never leave her at any moment and he will be with her whenever she wants him and my 3rd promise is he just loves her. Parineet falls on the floor. Rajeev makes Neeti wear the promise ring. Someone helps Parineet to get up. Sanju/Rajeev cuts the cake with Neeti. Everyone claps for them. Parineet comes there but she couldn’t see Sanju and Neeti feeding cake to each other because of the crowd around them. Pari calls Rajeev through Chandrika’s phone. He leaves from there telling Neeti. Neeti notices Parineet and assumes that she came for her. She happily hugs her and feeds the cake. Rajeev returns home. He asks Chandrika where is Parminder. Chandrika says she is sleeping and I called you for Pari as she is worried about seeing a nightmare. She went out to search for you. Rajeev calls Parineet and asks her to return home soon. Pari returns home. Rajeev scolds her for leaving in the night time. He asks her to stop her tears otherwise her dream may become real. She closes his mouth.

In the upcoming episodes, viewers will witness Rajeev will shout at Parineet and reveals to her that he just married her for the land and his freedom. Parineet will stand in disbelief and asks him to not say it in that way. Rajeev will say he has nothing to do with her and asks her to get lost from his life.

Will Parineet leave Rajeev’s life? Will Neeti find the reality of Sanju?