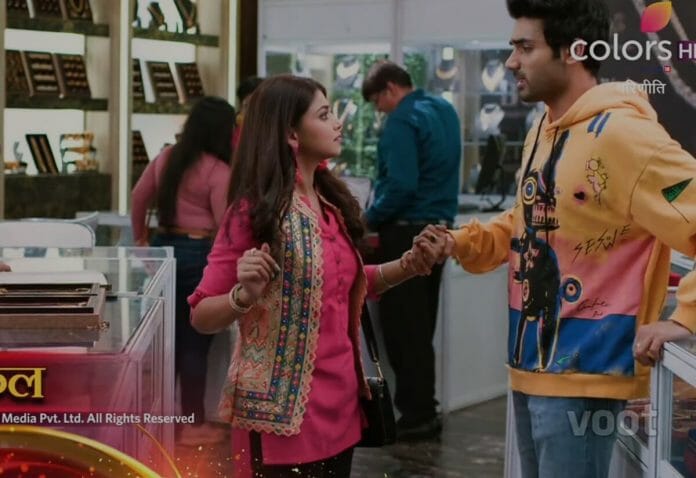 In the previous episode we saw; Parineetii stopped Rajeev from leaving and said to him she will bring food for him in office. He denied in frustration and managed to lie with her that his friends won’t allow him to taste her food. She learnt from he has few friends and decided to cook for all. Neetii reached to jewelry shop and waited for Sanju there. Sales woman suggested her to check the design till her fiance come. She mistakenly spilled the juice on Pari’s relatives.

They started taking class to Neetii and insulted her pointing out her culture. Neetii gave fitting reply to them. They praised Parineetii’s culture and the way she respecting elders. They compared her with Neetii. She again argued with elders there and said to them she was here for wedding shopping. They badmouthed about her fiance too. Parineetii cooked for Rajeev. Later Sales woman gave nuptial chain to them Sanju denied it reasoning he was getting another girl thought.

He lied to her that one girl was wore the same nuptial chain in bank get husband died in front of him. Neetii consoled him it’s normal to afrected by such incidents she felt bad for that girl. Parineeti’s nuptial chain fall down she got panic and called Rajeev.

He scold her for called him. She felt relive hearing his voice. She thought her mom taught her wrongly nuptial chain broken or falling down is bad omen. Sanju tried to prove his love for her. Neetii shared her feelings to him.

In the upcoming episode viewers will see; Neetii will inform to Rajeev his work is important to him then anything. She will ask him to go back to his work her friend will help her in shopping. Later Rajeev will come out calling to someone he noticed Parineeti there and turned around. She will struggle to cross the road Neetii will notice her and help her to cross the road. Whole crossing Parineetii’s dhuppatta falls on his face.

What will happen next? Will Rajeev get caught? When will Neetii find out the truth?