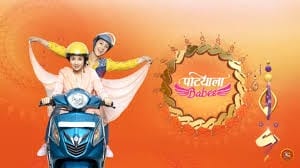 Episode begins with grandmother is telling Mini to check the processing in the restaurants and she says to the helper cooks to follow the orders of Neil Oberoi and she also says to Neil that this is your team and whether you like it or not but you have to work with them. They are your team members and you have to inspire them and make them work and also have to deliver your best. She says this is my order and we have to do it somehow. Mini says get back to work without wasting time while Neil looks at Mini and gives a sarcastic smile. Arya is with Rani sister and she is watching some kids are playing there and when a random guy is watching her with odd eyes from long and Arya feels uneasy with his watching.

Mini is standing with Rani and she complains to her that this boy is watching me from long and Rani says do not pay attention to him and do your work. She asks her if she will eat something? Arya says she will like to have guava and Rani went to bring that while that boy comes to Arya and starts to bother her. She says to him don’t talk to me and go from here and that boy told her why should I go ? Does this street belongs to your father? She says I don’t want to talk to you and he calls her stupid and Arya gets irritated and says don’t bully me and I will not let you bully me and I can defeat you with my sense and intelligfence. That boy fell down on his own and he gets up and starts to drag the hair of Arya.

Arya push him and he fell down and his knee starts to bleed and he starts to cry. His grandmother comes out and asks all to catch Arya, she gets scared and runs from there and entered the house and closes the door. She asks Rani not to open the door and says they will give me to the police and she starts to cry and Rani feels bad to see her like that.

Mini is discussing with her grandmother about his dream job and says she has to find something useful for her in the city and she has taken training in photography and maybe if she tries with full efforts then she can get something useful. Simpi comes to Mini with a complaint that she can not work with Neil and says he insulted me in front of all.

Neil comes there and says to Simpi to do the work and she says I am not doing anything for you because I am not going to work under you and Neil seems very unapologetic about it. Mini tries to talk to Neil but she gets a call from Rani and she runs from there in a hurry and tells Neil to manage his team as he has to work with them at the end.

Precap : Mini reaches the spot and makes Mini understand that she doesn’t do anything wrong.

pdate will be published soon