Episode starts with Omkar telling Mayura about how it was Raghav who hurt Manjiri and Shankar. Mayura is shocked and tells they should do police complaint or talk to his seniors but Omkar says its of no use. Raghav is shown hearing all their conversations, he says he has placed microphones everyone in the house. Vishakha calls Raghav and threatens him to remove Omkar from their lives within 3 days or else she will hurt his love ie Mayura. Raghav gets angry and scolds Vishakha and tells her to stay in her limits. Vishakha gets angry and throws the chessboard.

Raghav is going somewhere but Omkar stops him. Omkar tells Raghav to come with him and tries to take him away from his room. While Mayura searches Raghav’s room to find some evidence. Raghav insists to go back but Omkar keeps stopping him. However he goes back to room when Mayura is still there. She quickly hides and then Omkar signals her to leave while he deviates Raghav. Later, Raghav feels suspicious and plays recorder to overhear,he hears that Mayura tells Omkar they couldn’t find anything at Raghav’s room.

Megha is talking to someone in corridor and Raghav makes her unconscious. Mayura asks Shankar and Manjiri how they are feeling. Sanjay comes there and she asks him about Megha. She thinks its unsafe to let anyone stay alone. When she goes out to call Megha, she finds her hanging on terrace railing. Omkar and Sanjay bring her and asks what happened. She tells how she suddenly became unconscious. Omkar goes and asks Raghav why is he hurting his family. Raghav tries to threaten him but Omkar doesn’t get afraid. Raghav feels frustrated.

Manjiri tells Mayura she wants to do havan to remove bad eye from their family. She tells that havan kund is in store room. Raghav overhears it and plans something. Omkar does first aid to Shankar and tells its healing. Manjiri tells she will go to bring havan kund, but Mayura tells she will bring it. Raghav gets shocked to see that Mayura went to store room instead of Manjiri. Suddenly they hear Mayura shouting for Omkar. Omkar and Raghav break the door and find it full of smoke. Omkar hugs Mayura. Raghav tries to show his concern but Mayura angrily scolds Raghav. She goes away with Omkar.

Mayura and Omkar look at each other and recall how they planned everything. They had placed microphones and cameras to keep eye on Raghav. Also when Raghav attacked Megha, everything was recorded. Raghav’s evil plan of trying to hurt Manjiri in store room was also recorded. Mayura recalls how she wore mask, and carefully entered the room to avoid getting shock or major injury. Omkar tells now they have enough evidences against Raghav and soon they will find who is one helping him with everything. Episode ends on Omkar and Mayura smiling at each other while Raghav looks on helplessly. 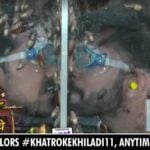