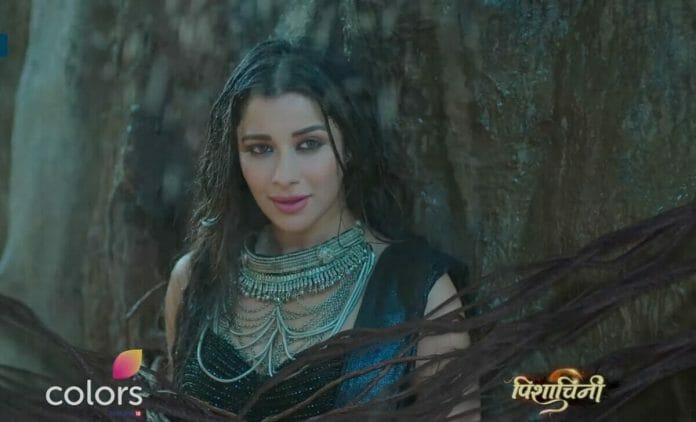 Colors’ popular supernatural show, Pishachini, is gearing up for more drama, with Pavitra using her child to free herself.

Previously, it was seen that Pavitra shared with Rocky that she had felt uncomfortable with Veer’s touch. Rocky decided to talk to Veer about it despite Pavitra asking him not to, since it could create problems between Shikha and Veer. The latter saw Vidya writing a mail to Nashak about Rani’s warning about a new threat along with the photo of the nail that Pavitra had found in the jungle.

Veer was scared that the real Nashak would learn about his presence and would help the Rajputs to capture him like Rani. So he lied to Vidya that he was Nashak. He said the same to Pavitra and Rocky when they came to talk to him. He added that he had come to protect them from a new magical creature which was after them.

He said that creature was Maha Pishach. On the other hand, Rani planned to free herself using her baby. She tied her hair around the cradle. She created a storm and shouted, crying. Sapna felt bad hearing Rani’s cry and went to her along with Bubli.

Rani manipulated Sapna to take her child’s cradle away to save him from the storm. Sapna obliged. Rani thought of killing the Rajputs once her child released her.

In the upcoming episode, it will be shown that Rocky and Pavitra will see the dark clouds being gathered above the place where Rani is captured by the tree. Pavitra will sense that something is happening there.

Rani will be released. Rani and Maha Pishach will fight. Pavitra, Rocky, Sanchit and Vidya will be shocked to see this.

What is the enmity between Rani and Maha Pishach? How will Pavitra stop now two Pishach?