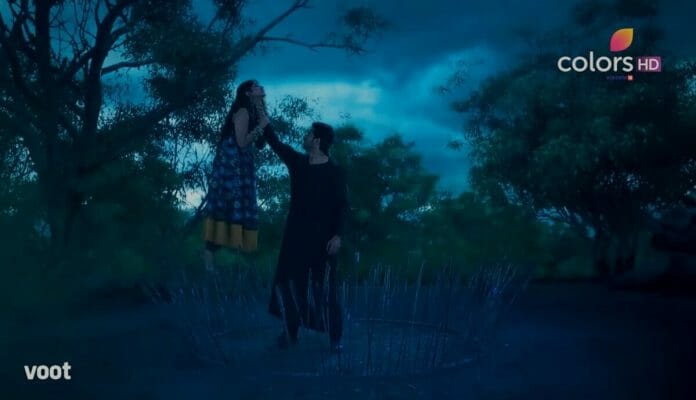 Colors’ popular supernatural show, Pishachini, is gearing up for more drama, with Pavitra shocking Maha Pishach by counter attacking him.

Previously, it was seen that Rani sent a black cloud to Dadaji to order him to release her. But Dadaji rejected her order as he had teamed up with Maha Pishach. Pavitra took the Rajputs’ blessings and left with Veer taking a basket. Pavitra had said that she kept baby Pishach inside the basket.

Vidya told Rocky that Rani was scared of Maha Pishach and asked her to release her. Rocky understood that Maha Pishach couldn’t be Rani’s friend and his motive for coming wasn’t to save Rani. He wondered what could be his real motive. He decided to go to find Pavitra alone, refusing the help of Sanchit and Vidya.

He had attached a glitter power to Pavitra’s dupatta to find her wherever she was going. While Rocky was finding Pavitra following the trace of glitter powder, Veer took Pavitra to a place where the green start was visible. He revealed to Pavitra that he was Maha Pishach and Pavitra was his target, since she was a special person whom he was looking for.

He understood it when Rani had told him that she had destroyed Maha Pishach’s crown. He asked the green star to send green rainfall. A green rainfall happened. Veer said that this rain would weaken Pavitra’s power so that he could swallow her and her power easily.

Pavitra shocked Maha Pishach by counter attacking him. She had come with full preparation as she had doubts about Veer.

In the upcoming episode, it will be shown that after a fight, Maha Pishach will grab Pavitra’s neck and will lift her. Pavitra will struggle to breathe. Rocky will shoot arrows around Maha Pishach.

The latter will be surprised and will ask how he knows about this. Rocky will say Nashak. Just then, the real Nashak will come there.

Can Pavitra and Rocky put an end to Maha Pishach? Who is the real Nashak?