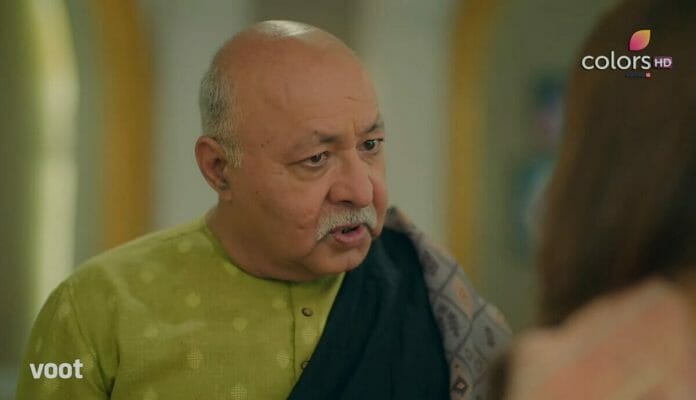 Colors supernatural show Pishachini is gearing up for more drama with Pavitra to tell Rocky that Rani is Pishachini.

Previously, it was seen that Rani stopped time as soon as the holy water had splashed over her and she transformed into Pishachini. The latter revealed to Pavitra that she understood Pavitra’s tricks earlier and threw a spell to stop the timing. But Pishachini was puzzled about how Pavitra wasn’t affected by her magic spell.

Pavitra revealed that she was the daughter in law of the priest who captured Pishachini earlier. She was saved because of her grandfather, who threw her in God’s hand. She vowed to capture Pishachini in her grandfather’s box again.

Pishachini mocked Pavitra and expressed her wish to transform everyone in the Rajput’s family into a pishaach like her. Pavitra  said that she was standing between her and the Rajouts and challenged Pishachini  to get past her to attack the Rajputs.

Pishachini narrated to Pavitra how she used to be a greedy woman 200 years ago and how she killed many people, including her husband and in-law out of her avariciousness, but ended up, getting killed by one of her victims.

In the upcoming week, it will be shown that Pishachini will continue to narrate how she became a pishachinithe and how she got her magical powers, which will increase when she turns her victims into a pishaach. Pavitra will vow to expose Pishachini.

The latter will mock Pavitra and will use her magical powers that bring time back to normal. Later, Pavitra will tell Rocky that Rani is Pishachini. Rocky will think that Pavitra is blaming Rani out of jealousy to stop their wedding. He will refuse to believe her.

Later, Pavitra will be stunned to see Dadaji standing on his own feet. Dadaji will reveal that Pishachini’s spell effects on him were reversed when she brought time to normal. Dadaji and Pavitra will join hands to expose Rani’s truth in front of the family.

Can Pavitra and Dadaji be successful in exposing Pishachini? How will they do it?