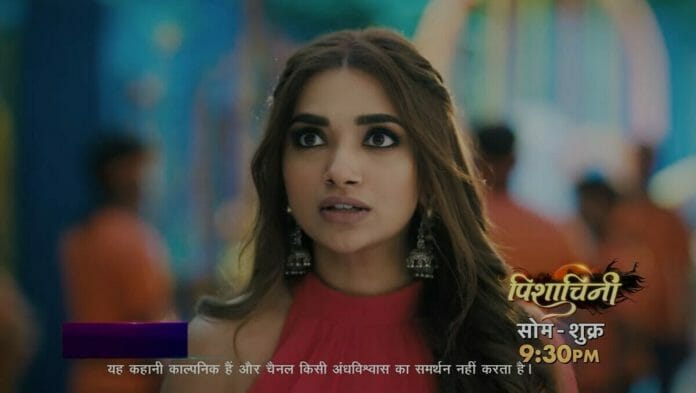 Colors supernatural show Pishachini is gearing up for more drama with Pavitra deciding to return to London.

Previously, it was seen that Rocky accepted to marry Rani in front of his family. Pavitra was shocked by Rochy’s changed decision and felt deceived by him. She decided to return to London. Rocky got clueless when his family hugged him, congratulating him.

Rocky was surprised when they told him that he had agreed to marry Rani. A FB showed how Pishachini brought Rocky under her control by giving him some magical drink through Shikha. Dadaji understood this and tried to alert his family. Pishachini send it and took Dadaji from there on the pretext of dropping him at his room.

Pishachini transformed Dadaji’s room into a forest. She told how she used Pratik’s wishes to trap him. She admitted to again trapping someone from the family and challenged Dadaji to think who it could be. She revealed her intention of changing everyone in the family as a witch like her.

Just then, Pavitra arrived to take Dadaji’s leave. Pishachini changed the room back to the normal condition and sat over a cupboard watching Pavitra conversing with Dadaji. Pavitra told Dadaji that she had come to Bareli thinking that Pishachini had come there, but it wasn’t the case, so she was leaving.

Dadaji tried to tell Pavitra that Pishachini was there,but Pavitra didn’t understand him. Later, Rocky was shocked to find out that Pavitra was leaving for London. He tried to change her decision, but in vain.

Rocky told Pavitra that he wanted to say no, but he himself didn’t know how he said yes. Pavitra was shocked when he said that he felt that he was hypnotized.

In the upcoming episode, it will be seen that Rocky will be walking along with Rani. Rocky will hear a shout for help while crossing the old mansion. Rani will get nervous. Rocky will follow the shout and will find out that it’s coming from inside the well.

He will decide to get down the well to save that person. Pavitra will arrive there. Later family will be surprised to see Pavitra. The latter will say that she wants to tell them something.

What will Pavitra do now? Will Pavitra try to stop Rani and Rocky’s wedding?