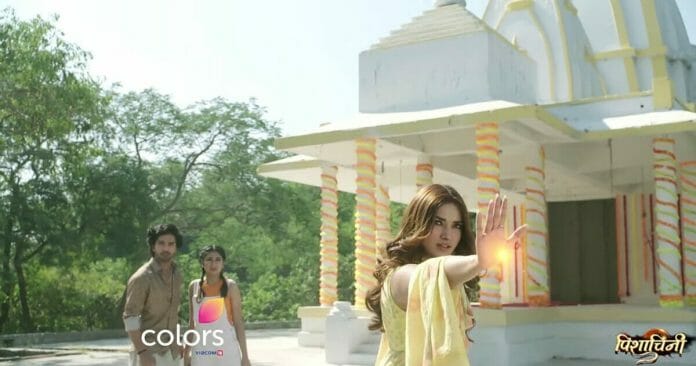 Previously, it was seen that Vidya practiced her newly acquired power of changing avatar in front of the family. She also taught them how to identify whether the appearance was real or not using a red mirror. The Rajputs decided to close the old mansion where Pishachini used to reside. They called construction workers and the priest for the same purpose.

But Rani abducted them. Rocky saw the workers had disappeared and thought that Pavitra was right about the upcoming danger. The Rajputs feared what Rani would do. They realized Dadaji had gone to the temple alone. They tried to reach him. There, Rani attacked Dadaji in her giant avatar.

In the upcoming episode, it will be seen that Rani will swallow Dadaji alive. Pavitra, Rocky, Vidya will reach the temple and will search for Dadaji. Pavitra will find the holy water that Dadaji has with him lying on the floor. Pavitra will be worried about what happened to Dadaji. She will challenge Rani to come in front of her.

She will call Rani a coward for attacking them by hiding. Rani will show up. She will laugh maniacally and will say that she swallowed Dadaji, shocking Pavitra, Rocky and Vidya. A furious Rocky will run towards Rani with a weapon to attack her, but Rani will throw him away using her power.

Pavitra will use her divine power to attack Rani, but to everyone’s shock, Pavitra’s power will become weak in front of Rani. Rani will say that she has become a pralaya pishachini now, so no one, including Pavitra, can defeat her.