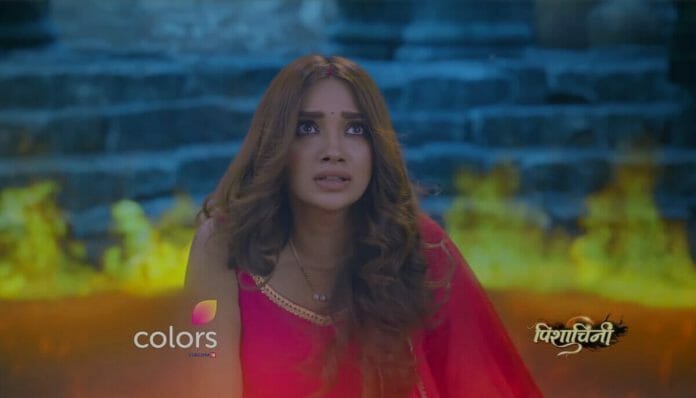 Colors TV’s popular supernatural show, Pishachini, is gearing up for more drama with Pavitra going with Rani to fight her alone.

Previously, it was seen that Pavitra wanted to leave the house so that no one from Rajput’s family would die because of her. But Rocky and the Rajputs stopped Rani by stating that this was their battle and they should fight Rani together.

The Rajputs created a barrier outside of the house to prevent Rani from entering the house for awhile so that they could get time to make a plan against Rani. Pavitra got worried when Rani destroyed that barrier. So Pavitra went with Rani to fight her alone without telling anyone in the family.

In the upcoming episode, it will be seen that Rocky will realize Pavitra isn’t at home and will alert the family. The family will realize even Shikha and Vidya are missing and will go to find them. Here, Rani will take Pavitra to Pishach Devta, who wanted Pavitra as a sacrifice in exchange for opening the pishach door for Rani.

There, Shikha will tell the Rajputs that she got hypnotized by Rani. Rocky will understand that Rani didn’t harm anyone else in the family as Pavitra went with her by her will. She decided to sacrifice herself to save the Rajputs. Here, Pishach devta will get ready to kill her.

Pavitra will have the divine symbol she brought from home in her hand. She will think of using it to kill Pishach Devta after being swallowed by him. Rani will hear two heart beats and will realize why Pishach Devta demanded Pavitra now. On the other hand, Rocky will find out that Rani took Pavitra to Pishach Devta as she’s indebted to him.

What will happen next? What will Pavitra do now? Can Pavitra find a way to defeat Pishach Devta?