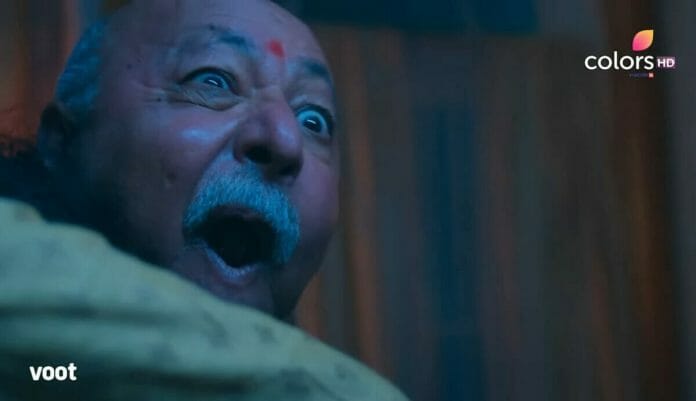 Colors supernatural show Pishachini is gearing up for drama with Pavitra learning that Pishachini is in Bareli.
Previously Rajput reached Bareli. Shikha remembered a FB in which Dadaji warned all to not go to the old mansion where Pishachini used to live.

Pavitra wanted to wave bye to Pratik and Amrita seein them, but Pratik waved her bye from the window to hide Pratik having one leg and Amrita having old lady look. Prathik and Amrita’s condition didn’t change despite of Pishanin’s departure.

Shikha didn’t want to let Pishachini inside the house, so she left the trunk in the old mansion. Pishachini laughed at Shikka’s stupidity to think that she couldn’t enter the mansion and planned to enter the house using Shikha.

Later Pishachini tried to manipulate Shikha to invite her to her mansion. Meanwhile Rocky came out to talk to Pavitra on the video call. Pishachini noticed Rocky and thought of meeting him soon. Pavitra noticed a girl shadow when Pishanini flew away. Pavitra questioned Rocky who was the girl.

Rocky said that there was no one around him and showed his surrounding to her. Pavitra got shocked seeing white flowers on the ground and confirmed that Pishachini was in Bareli.

In the upcoming episode it will be seen that Pishachini will enter the Rajputs’ mansion. She will find Dadaji sleeping alone and will attack him. She will lift him up by encircling her long black hair around his neck and will try to strangle him. Shikha will get horrified seeing this. Pishachini will then attack Shikha.

Will Pishachini kill Dadaji? How Pavitra will save Rajputs from Pishachini?
Stay tuned to this space for latest update of your favorite shows.