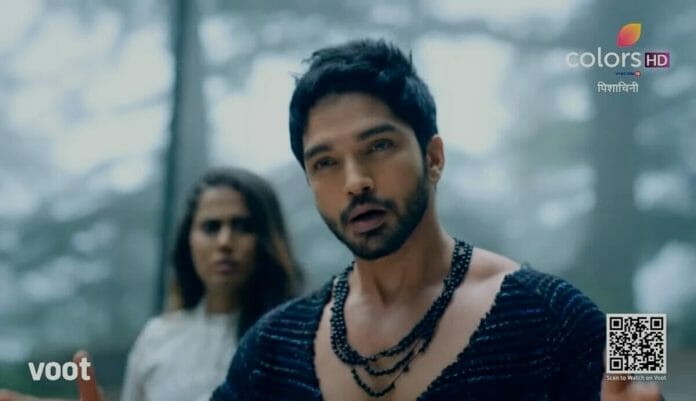 Colors newly launched supernatural show Pishachini showcases the story of Pishachini threatening Pratik to kill his daughter if he tells the Rajputs the truth.
In the previous episode it was seen that Pavitra misunderstood that Rocky for Nikkita’s fiance. Pishachini came to Pavitra’s room and spotted her parying to Hanuman’s photo frame.

She tried to capture Pavitra extending her long black hair. But Pavitra turned around. Pishachini mocked Pavitra about being a devotee. Pratik felt guilty of lying to his family and decided to tell them the truth. Pishachini threatened Pratik and Amrita.

Nikkita spotted Rocky flirting with a girl and told Nikkita about her boyfriend being a playboy and assured her to get proof for the same. Rocky along with his cousins went into the woods. Rocky said that Pratik got all his richness with the help of Pishachini and said that he could also make a deal with her.

Pishachini was following them and decided to use Rocky to reach Bareli.
In the upcoming episode it will be shown that Pishachini will hypnotize Rocky and will say that he will be mesmerized in her trap and in her long hair. Nikkita will say that she will definitely trap him this time.

Will Pishachini be able to use Rocky to take her revenge from the Rajput? How Pavitra and Pishachini are connected? How Pavitra will stop Pishachini?
Stay tuned to this place for latest update of your favorite shows.