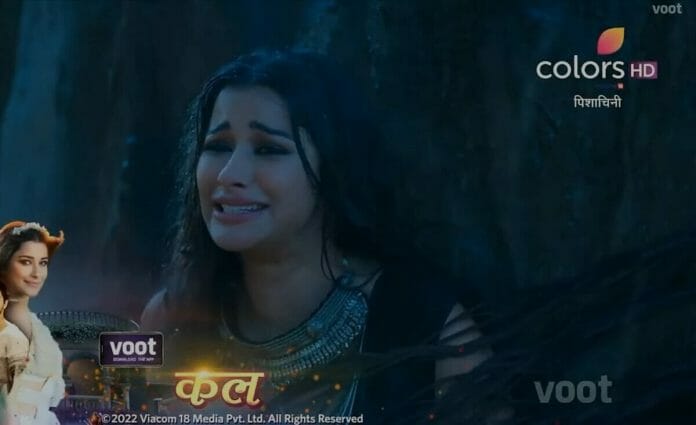 Colors’ popular supernatural show, Pishachini, is gearing up for more drama, with Veer pretending that he is Nashak.

Previously, it was seen that Pavitra found a big nail in the jungle near the bone. Pavitra doubted that it belonged to some magical creature. Veer talked to Dadaji, who was caged. It was revealed that Dadaji was working for Veer. Veer revealed to Dadaji that he had found his target in the Rajputs’ family and executed his plan after two days.

Rani alerted Vidya about Maha Pishach and said that only she could save the Rajputs from him. She asked Vidya to free her. Vidya was scared of hearing this. However, she won’t trust Rani’s words. Veer touched Pavitra while dancing and the latter felt weird. She grew suspicious of Veer

In the upcoming episode, it will be shown that Pavitra will share with Rocky that she felt uncomfortable with Veer’s touch. Rocky will decide to talk to Veer about it despite Pavitra asking him not to, since it could create problem between Shikha and Veer.

The latter will see Vidya writing a mail to Nashak about Rani’s warning about a new threat along with the photo of the nail that Pavitra found in the jungle. Veer will be scared that the real Nashak will learn about his presence and help the Rajputs to capture him like Rani. So he will lie to Vidya that he is Nashak.

He will tell the same to Pavitra and Rocky when they come to talk to him. He will add that he came to protect them from a new magical creature which is after them. He says that creature is Maha Pishach. On the other hand, Rani will plan to free herself using her baby. She will tie her hair around the cradle.

She will create a storm and will shout, crying. Sapna will feel bad hearing Rani’s cry and will go to her along with Bubli. Rani will manipulate Sapna to take her child’s cradle to save him from the storm. Sapna will oblige. Rani will think of killing the Rajputs once her child releases her.

What will happen next? Will Rani get freed?