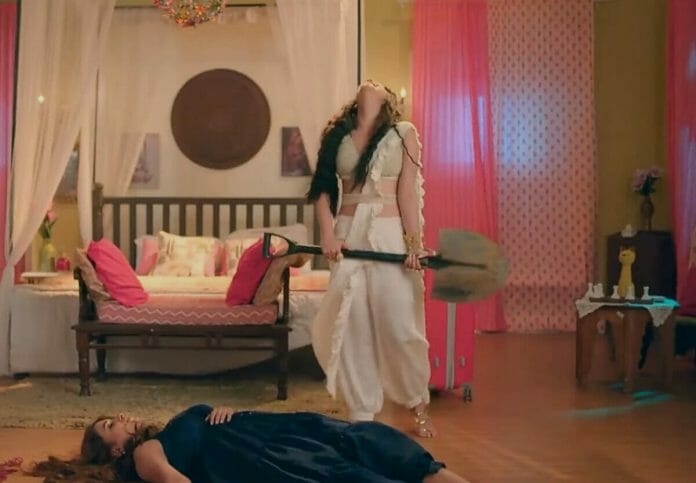 Colors’ supernatural show Pishachini is gearing up for more drama with Rani again failing Pavitra’s attempt to expose her.

Previously, it was seen that Rocky started to drink the juice, but he dropped the glass when Vidya collided with him accidentally. However, Rocky came under Rani’s spell as he had consumed a small quantity of the juice. He forgot Pavitra and started to dance with Rani. Meanwhile, Pavitra prayed to God, asking him to show her a way to expose Rani.

Pavitra’s grandfather’s diary burned suddenly and the fire took a key’s form. Pavitra found the key. She wondered how to use that key. Suddenly, the key transformed into a knife. Pavitra stabbed Rani using that knife. However, she was shocked when blood oozed from Rani’s body. Rocky rushed Rani to the hospital.

Pavitra was stunned when Rani appeared in front of her along with Dadaji, Pratik and Amrita. Rani boasted about defeating Pavitra again. Pavitra wondered who she had stabbed then.

In the upcoming episode, it will be shown that Rani will reveal to Pavitra how she learned about Pavitra’s plan and changed an innocent girl to Rani and sent her to dance with Rocky. She will blame Pavitra for that girl’s death.

Pavitra will run from there crying. Rani will teleport herself to the hospital ward and will kill that girl. She will hide the dead body under the bed when Rocky comes to see her. Pavitra will feel regretful and will call the police home to surrender.

But Rani will tell the police that it was an accident and Pavitra wasn’t at fault. Sapna will refuse to forgive Pavitra and will ask her to leave the house by the next morning. Later, Pratik and Amrita will mock Pavitra and will partially reveal about the secret behind Rani and Rocky’s wedding.

As Pavitra will be praying asking God to show her a way to stop Rocky and Rani wedding, Rani will attack Pavitra, making her faint.

What is the secret of Rocky and Rani’s wedding? Will Rani get successful in marrying Rocky?