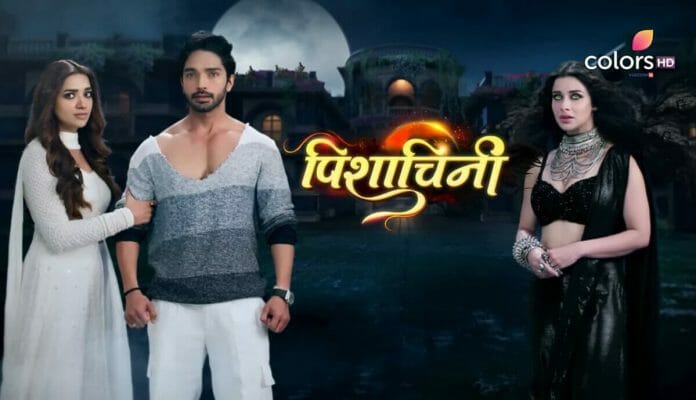 Last week, it was seen that Rani killed Himani and her parents and made it look like an accident. She returned to the Rajputs and pretended to be a pitiful girl, who turned an orphan after losing her family in a car accident. Rocky blamed Pavitra for the accident. Pavitra was feeling guilty about what had happened to Himani.

Dadaji said that Pavitra shouldn’t blame herself since Rani killed Himani and her parents like she killed Pavitra’s parents 20 years ago. Dadaji said that Rani’s sole motive was to become a member of this family and she could do anything for that.

Meanwhile, the Rajputs were consoling Rani. Rani instigated the Rajputs by saying that Himani was hurt by Pavitra’s words and accelerated the car, which caused the accident. Pavitra got hurt after overhearing Suman also partially holding Pavitra responsible for the accident.

Later, Rocky confronts Pavitra about still thinking Rani is Pishachini. Pavitra firmly said whether Rocky wanted to believe her or not. The fact is, Rani is Pishachini and she wasn’t Himani’s sister. She further revealed that Rani killed her family 20 years ago and made her an orphan. She asked Rocky to give her a chance to expose Rani’s truth.

She convinced Rocky to feed a bite of food to Rani anyhow. Rocky agreed to help Pavitra by giving a chance to proverb her right. In the morning, Rocky came to Rani’s room with breakfast for Rani. The latter recalled how she wasn’t able to eat food and Pishaach telling that Pishachini couldn’t wat food like humans.

Rani refused to eat, but Rocky urged. Pavitra was watching this hiding. Rani heard dhol playing sound. She used the opportunity and escaped. Rocky asked Sapna about calling the dhol players. Sapna and Sudhkar shocked Rocky and Pavitra telling that they decided to perform Rocky and Rani’s wedding on the fixed date which would be in the next three days.

Rocky tried to refuse without any success. Sapna fed a sweet to Rani to celebrate it. Pavitra and Rocky were shocked when Rani ate the sweet. Later Pavitra clicks Rani’s picture when she was in her Pishachini’s attire and throwing up.

Rani tried to snatch Pavitra’s phone from her hand. Rani attacked Pavitra. They both fought. Rocky and the family rushed to the kitchen after hearing the noises. Pavitra showed the pictures she clicked to the family. To her shock, Pishachini wasn’t present in those photos.

Later, Rani told Pavitra that she couldn’t be captured on camera. Dadaji found a key in the potli given by the priest. Rocky was instigated by Rani against Pavitra. He confronted Pavitra about attacking Rani. Pavitra denied the allegation and asked Rocky not to marry Rani as her motive was to destroy his family.

Pratik and Amrita made Pavitra believe that they have come to help her against Rani. Trusting them, Pavitra told them that Dadaji got well and he was also involved in their plan against Rani. Later, Pratik alerted Rani about the same. Pishachini found Dadaji in her room and asked him what he was plotting against her.

Unaware that Rani knew the truth, Dadaji tried to escape by moving the wheelchair faster. Vidya saw this and notified Rocky. They went to find Dadaji. The latter dropped the key on his way mistakenly. Rani caught Dadaji in his room.

She asked him what he was hiding from her. As Dadaji refused to answer, she captured him in a photo frame using her magical powers. Hearing footsteps, Rani lied on Dadaji’s bed and covered herself with a quilt.

Rocky and Vidya thought that Dadaji was sleeping and left. On the way, Vidya saw the key on the floor and picked it up.

Pavitra said that she wouldn’t let Rani be successful in her plan to which Rani said that Pavitra was fighting alone against her. Later, Rani got ready for her Sangeet ceremony. Pratik and Amrita assisted her. They discussed putting an end to Pavitra in the Sangeet ceremony.

Meanwhile, the tree was emitting a green colored light and dragged Vikas’s dead body inside. Maddy witnessed this. Rocky noticed the strange light coming from the restricted side of the mansion and went to find it. He found Maddy there and he noticed the watch around his wrist. Rocky was shocked not to find Maddy the next second.

Meanwhile, Pavitra got suspicious of not seeing Dadaji from the morning. She went to his room to see Dadaji. But Pratik and Amrita said to Pavitra that Dadaji was sleeping and she shouldn’t disturb him. So, Pavitra went to see Dadaji when they were all busy with the Sangeet ceremony. She was stunned when she didn’t find Dadaji in his room.

She checked everywhere in the room to find him, but in vain. Just then she noticed Dadaji’s potrait blinking his eyes. She was shocked when she realized that Rani had captured Dadaji in a photo frame. She told Rocky the same.

But he refused to believe it. So, Pavitra brought Rocky in front of Dadaji’s portrait so that Rocky could see Dadaji blinking his eyes. She was shocked when Dadaji arrived there in his wheelchair.

In the upcoming week, it will be shown that Pavitra will find the key and will pray to God to give her a final sign of hope. Suddenly, the key will transform into a knife.

Pavitra will look at the knife, then at Rocky and Rani, who will be dancing. She will approach Rani and will stab her with that knife. Rocky and the Rajputs will be shocked by Pavitra’s actions.