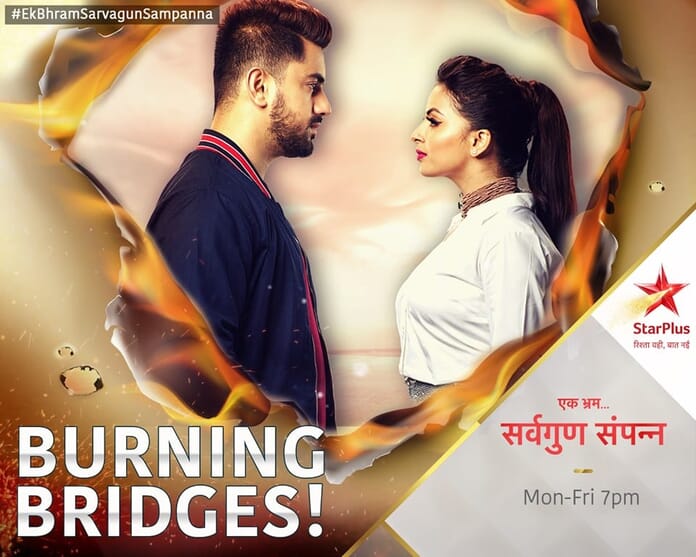 Drama will galore in Star Plus show Ek Bhram Sarvagun Sampanna after Pooja’s fashion show will be ruined.

Pooja gives an emotional speech at the fashion event. Here, Ranjeet and Chopra plans against Pooja and decides to ruin the event. They think of framing Kabir too so that misunderstanding grow more between the duo. Meanwhile, Suman informs Jay that Dhruv is on the way and will reach the event venue to avenge Pooja. Suman worries for Dhruv.

Further, Kabir gets a call from someone. The person from the other side tells him that the photo-frame Pooja is carrying has an electric current in that and Pooja will get hurt. Kabir rushes to the stage to save Pooja and unintentionally ends by breaking her Parents photo-frame. Pooja lashes out at Kabir for stooping low.

Now in the upcoming episode will see, Pooja will accuse Kabir and will say that he is at Dhruv’s side.

Pooja will shout at Kabir, will accuse him of spoiling her fashion show, will also accuse him of helping Dhruv, and will threaten to send him jail. Later, Kabir will be unable to forget about Pooja’s insults. Here, Suman will criticize him for meeting her. Later, a confused Pooja will decide to visit a temple.

Do Kabir will be able to learn the Chopra and Ranjeet’s intension? Do Pooja will believe Kabir? What will be Dhruv’s next move, well for all the answers keep watching the soap mon-fri on Star Plus at 7pm.