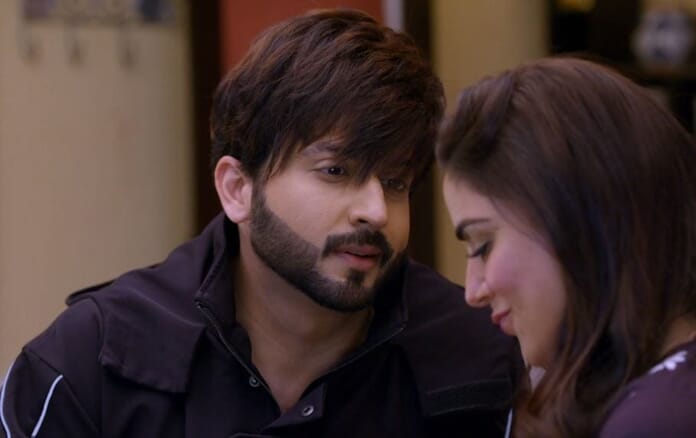 Scene begins in temple Preetha and Karan’s family reaches to temple. Everyone has beautiful smile in their face. Except Preetha everyone know the reason why are they here? Preetha is busy in chitchatting with Rishab and enters into temple. Karan keeps staring her and smiles. They reaches Infront of the idol. She gets surprises to see the arrangements there. She enquires to Sarla what’s going on here? She says to her that it’s a big day for her today. She makes her sit beside Karan and whisper in her ears its her engagement today with her childhood best friend. Preetha gets surprise to hear it. She can’t able to believe it she stares Karan in questioning way. He just passes a smile to her in return.

Preetha’s happiness having no bounds. Both falls into their deep eye lock. They forgets the situation around them and drowns into their eyelock. Rishab brings them back to world by saying its time to exchange the ring. Stop staring Preetha she won’t run away from him? Karan gives an embarrassed smile to them meanwhile Preetha blushes. He holds her hand and makes her wear the ring. Everyone claps for them. Karan holds her hand tighter to show he won’t let her leave from him. She holds back his hand assuring she won’t leave him.

They takes blessings from elders. Priest announces to them its good to fix their marriage after two months. Everyone gets happy to hear the news. Rishab notices Mahira calling to Karan. He takes his phone without anyone knowledge and puts his phone in silent mode. He sends a message to her that he is attending one important meeting in order to not disturb him again. That day went peacefully. Mahira gets irritate when Karan not responsing to her call at all. She dials to Karan again. Rishab smartly transfer her call to his number. He attends the call and talks with her in Karan call. His only intention is to save Karan from her. He feels its the only option to stop Mahira from poking her head in Karan’s life. Mahira shares to Rishab thinking him as Karan that she misses him a lot. He replies to her that he misses her too. Mahira gets happy to hear it. She wanna spend her times with her friends same time she needs to create sympathy so she lies to him that her dad is not well so she wanna stay with him for at least two months to take care of him. Rishab gets even more happy to hear it he asks her to take care of uncle if possible he will come and see him when he is free. Mahira gets happy and thank him. He thinks that let her wait for him till then he will help Karan to marry Preetha before she returns. He asks her to take care and cuts the call.

It’s almost 1 and half month passed. Preetha and Karan marriage gonna take place in 10 days. Preetha’s beauty increases in marriage thought. Karan is busy in imaging a beautiful life with his loved one. Mahesh advises Sarala and Shekhar to stay in his house but they denies it reasoning they wishes to see Preetha entering into their house as their daughter in law. Mahesh arranges stay for them near by his house.

Preetha and Karan are talking in phone midnight. While talking Preetha bring a college days topic. She questions him out of the blue Is he ragged anyone in his college? Karan gets shocked to hear it. Some past incidents rushes into his mind so he feels restless. He excuses Preetha and disconnects the call. Karan rushes inside the bathroom and stars splashing water on his face. He stares mirror and he gets the reflection of himself as a young college student.