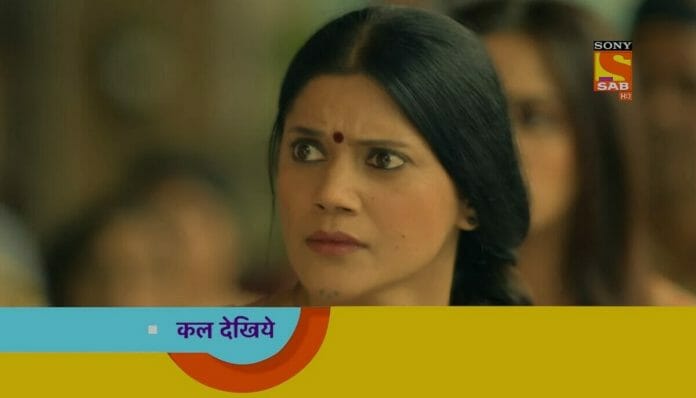 Sab TV channel launched a brand new show titled Pushpa Impossible starring Karuna Pandey alongside Garima Parihar and Darshan Gurjar. Earlier its seen that Ashwin cancelled his Dubai plan and reunited with Deepti. Now it will be seen that Pushpa will fight for her neighbour.

Previously we have seen that, Baskar bid an emotional goodbye to his family and left to Dubai. Ashwin and Deepti reconciled sorting out their differences and decided to clear their name.

Chirag advised him to take help from Inspector who gave him job as sketcher. Ashwin liked it. Sonal and Manish suggested to postpone wedding till the job issue gets resolved and Pushpa gladly accepted. Sonal adored Pushpa’s traditional lamp and told that if her husband Dileep was alive it would have been a great help for her.

She told that Rashi misses a father figure and Dileep would have cherished her if he was alive. Pushpa thought that he wanted to kill Rashi and not cherish. At school Pushpa gave amazing speech at speech competition.

In the future episodes we will witness, Pushpa’s neighbour gets abused by her husband. Pushpa will save her and will give police complaint against him. But to her shock, her neighbour will give statement in favour of her abusive husband.

Will Ashwin prove his innocence? Will Pushpa stand against women abuse?