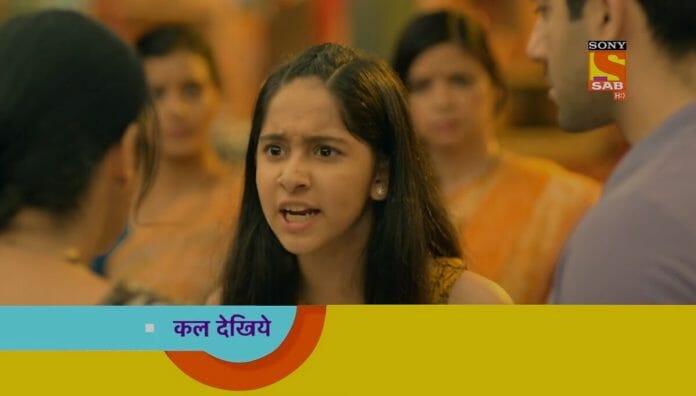 Sab TV channel launched a brand new show titled Pushpa Impossible starring Karuna Pandey alongside Garima Parihar and Darshan Gurjar. Earlier its seen that Pushpa visited Patan to get her certificates. Now it will be seen that Rashi will angrily confront Pushpa.

Previously we have seen that, Rashi scolded Pushpa for visiting her Principal for silly reasons. Pushpa worried what would they react when they got to know that she was planning to continue her study. Ashwin found his presentation missing and asked whether anyone used his laptop.

Chirag told about Pushpa using it and Ashwin scolded her for it. He called Deepti and informed about the mess. Deepti called him to her house to work whole night together to complete the presentation. Ashwin spent the night at Deepti’s house and both worked hard for the presentation.

They also spent some romantic time together. Deepti’s parents were happy seeing them together. Pushpa left to Patan cooking up excuse that she had kept mannat for Deepti and Ashwin’s marriage. Ashwin gave the presentation well and impressed the client while Deepti looked at him admiring.

Pushpa landed Patan and got emotional seeing the changes. Ashwin called Pushpa and told that the presentation was a success and asked her to take care. Pushpa visited her school but found that it was closed years back.

She went to her head master’s house who identified her as his favourite student Imlie chor. He took her to school and opened the gate. Pushpa got emotional stepping in her school after years.

In the future episodes we will witness, Rashi will find Pushpa’s certificates and her school admission form. She will confront Pushpa about her trying to study at this age and that too in her school. She will shout whether she’s out of her mind. Pushpa will ask whether their problem is her being uneducated or her trying to study.

Will Pushpa continue her education? How will Pushpa’s children support her big decision? Will Pushpa’s decision affect Ashwin’s marriage with Deepti?