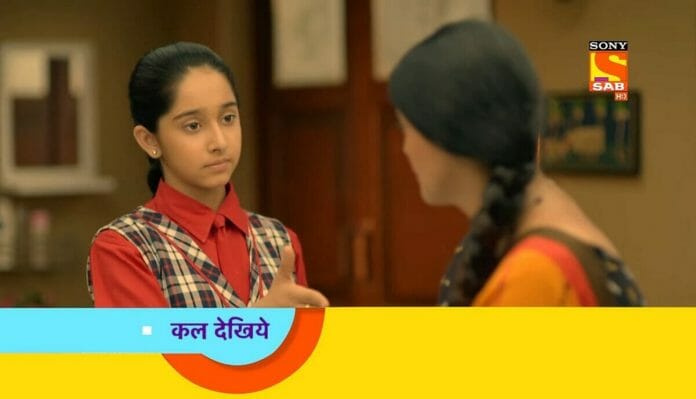 Previously we have seen that, Pushpa and Rashi got ready in their uniform to go to school. Chirag clicked their pictures and Rashi left fo school first followed by Ashwin.

Before Prarthana could alert Chirag, Bapodhara caught him and exposed Chirag using the initials on his shirt which he imprinted to catch the thief. Pushpa slapped Chirag for stealing and called him shameless.

Bapodhara called the whole family shameless and accused Ashwin for roaming around with rich girl and character assassinated Pushpa with Nanavati. Radha Kaku slapped him for his cheap behavior and made Bapodhara apologise.

Pushpa also made Chirag apologise to Bapodhara and asked him to pay for the dress with his own money. Chirag’s friend who helped him get the shirts for expelled from the colony and he blamed Chirag for it. Pushpa reached late to school and Nanavati scolded her for the same.

In the future episodes we will witness, Rashi will say Pushpa that with the speed she’s learning English it’s impossible for her to cope up with. She will forward her hand as a challenge and Pushpa takes it. Rashi will say in her mind that no matter how much she tries she will make sure to win her and throw her out of the school.