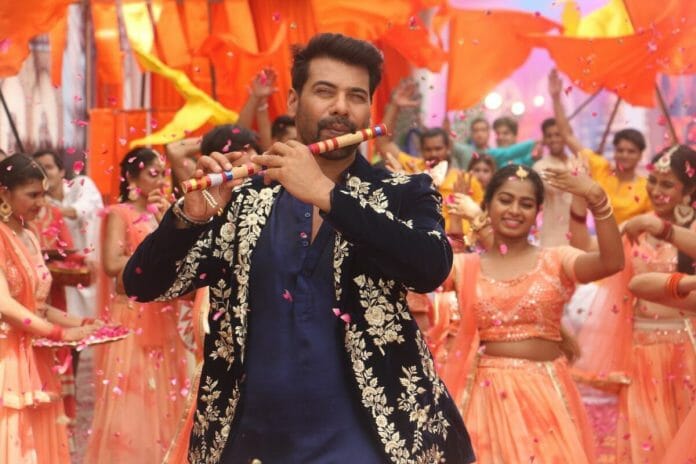 Episode begins with Radha recalls Mohan’s words about Bhagavad Gita. Her letter drops from Bhagavad Gita but she fails to notice that. Damini’s mother reads that letter. Radha notices that Gungun trying to ruin Mohan’s picture. She asks her that what the latter doing. Gungun tells her that she is blackening Mohan’s face because she hates him. Radha asks her to not say like that. Gungun notices that Radha is upset and says that Mohan must be behind the latter’s sadness. Radha tells her that Mohan don’t remember anything about her and Bhagavad Gita and also he don’t believe in God.

Gungun tells her that Mohan is like that only. Radha tells her that her mother died too when she was young and she blamed everyone. But then Mohan gave Bhagavad Gita to her. She adds that soul never dies so Tulsi’s soul must be around Gungun only. Tulsi’s soul smiles hearing that. Gungun tells Radha that everyone have mother except her. She asks her to accept that Mohan killed Tulsi. She adds that no one understands her and leaves from there. Radha cleans Mohan’s picture and leaves from there. Tulsi’s soul says that Radha understood Gungun and she is happy that Radha came to this house.

Damini’s mother gives Radha’s letter to Damini and tells her that Radha loves Mohan. Damini tells her that Radha just wanted to give Bhagavad Gita to Mohan. She adds that Mohan is kind to Radha because she saved Gungun. She asks her to not overthink and leaves from there.

Radha tries to apply ointment on her leg and breaks the glass. Mohan notices that and tries to apply ointment on her leg. But she stops him saying that he can’t touch her leg because he is Mohan. He tells her that she saved Gungun’s life so he could do atleast this much. He threatens her to not move her leg and applies ointment on it ( Title song plays in the background ). She asks him that if he really don’t believe in God. She tells him Bhagavad Gita’s slogan. He gets annoyed hearing her and leaves from there.

Dadi learns that Mohan applied ointment on her leg. Radha refuses to return. Dadi tells Radha that the latter loves Mohan that’s what the world will think. Radha gets panicked hearing her. Damini’s mother learns that Radha ran away from her house for Mohan. She gathers everyone in the hall. She reveals that Radha loves Mohan. Mohan’s brother Rahul tells Kadambari that she should have named him as Krishna. Mohan asks Radha that if she loves him.